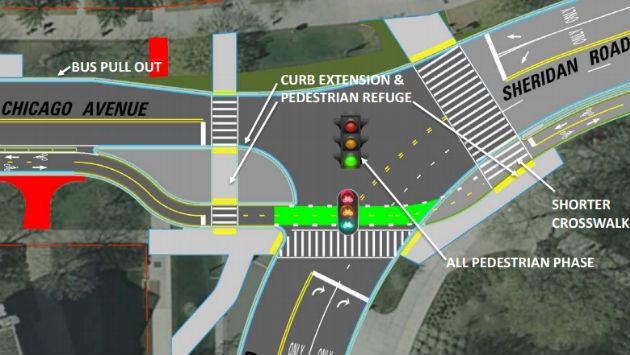 Here's a detailed look at plans to rebuild Sheridan Road along the Northwestern University campus in Evanston including new protected bike lanes that will extend down Chicago Avenue to Davis Street.

The project will create a two-way protected bike lane along the east side of the roadway, separated from the auto traffic lanes by a three-foot wide concrete curb.

The bike lanes will have their own traffic signals, which Lara Biggs, head of the city's engineering bureau, says have been show to improve cyclists' compliance with traffic rules when they've been used elsewhere.

As shown in the drawing of the Sheridan-Chicago intersection above, the plans also call for separating bicycle crossings from pedestrian crossings and extending curbs to provide "pedestrian refuges" — places for pedestrians to wait before crossing traffic lanes. 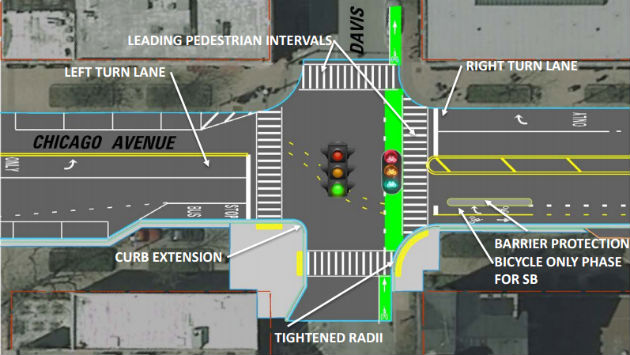 The southern starting point of the project — at Davis Street.

The project also calls for eliminating parking along the east side of Chicago Avenue to make room for the new bike lanes.

It also calls for removing some existing crosswalks (shown in red on the diagrams) to try to reconfigure where pedestrians cross the street. 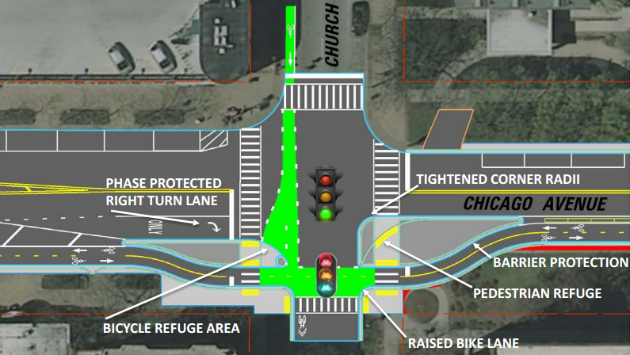 The intersection of Chicago Avenue and Church Street.

The new north-south bike lanes will connect to east-west bike lanes at Church and Davis Streets.

The $12.2 million project will tap $3.7 million in aid from the state along with $1 million in contributions from Northwestern University.

The southernmost section of the project — from Davis Street to Sheridan Road — is scheduled to be completed between April and June next year. 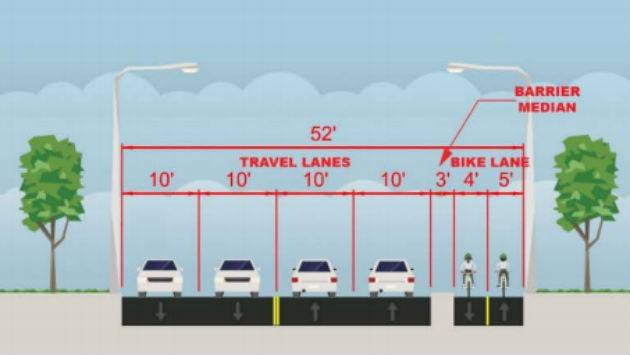 From the intersection of Sheridan and Chicago north to Northwestern Place the road will be widened to 52 feet to accommodate four auto traffic lanes and the bike lanes. 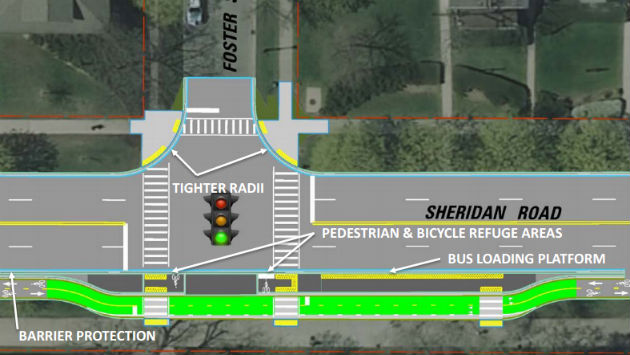 This section will have bus loading platforms that will keep one lane of traffic open for cars when buses pull over to pick up and drop off passengers.

North of Northwestern Place, where the road will have only three traffic lanes, there will be pullouts for stopping buses to get out of the traffic lane.

The section of Sheridan from Chicago Avenue to Lincoln Street is scheduled to be rebuilt from June to September next year, with the roadway north from Lincoln to the city limits scheduled for work in 2018.