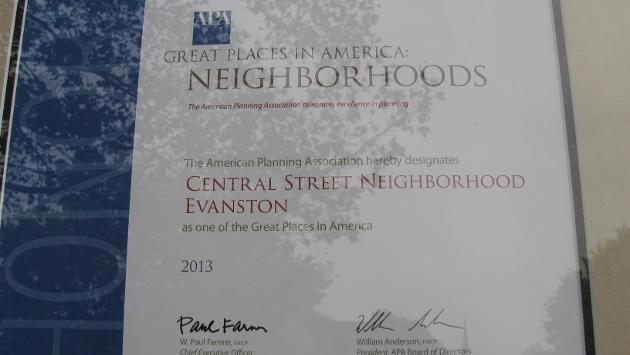 The designation of Central Street as one of the top 10 neighborhoods in the nation Friday was based upon a number of attributes, according to the American Planning Association.

The area, bounded by Wilmette to the north, Colfax Street to the south, Lake Michigan to the east, and Gross Point Road and Crawford Avenue to the west, “is distinctive and unique. It is not just another campus town area,” according to the APA.

Included in the area is the Grosse Pointe Lighthouse, Evanston Hospital, a Big Ten football stadium, CTA and Metra stations, Lighthouse Beach, a number of city parks, a vibrant business district, dedicated bicycle lanes for cyclists, a variety of living arrangements that include apartments, condominiums, and single-family residences, Curt’s Café that provides job and life-skills training to at-risk young adults, and a major Fourth of July parade. 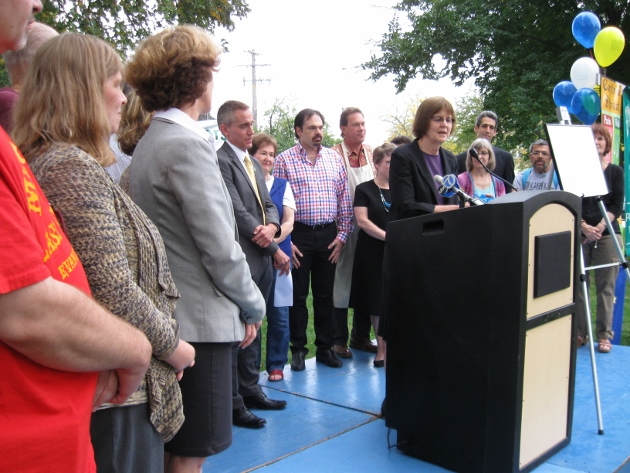 Mayor Elizabeth Tisdah congratulates the residents and merchants of the Central Street Neighborhood at a special ceremony Friday afternoon in Independence Park.

Abutting the south edge of the area is Perkins Woods, which is Cook County’s smallest forest preserve, labeled by the APA as “a bird watching hotspot.”

The association noted that the Illinois Historic Structures Survey of Evanston in 1972 identified more than 100 structures, including cottages, mansions, a school, the municipal water plant, a church, the lighthouse, and a gas station, as local or national landmarks.

In summary, the APA described the neighborhood as “an edgy urban vibe with a small-town pace and sensibility” and “a regional destination with an eclectic mix of homegrown businesses and eateries.”

Top: The plaque from the American Planning Association that was on display at the presentation at Independence Park in the Central Street business district.