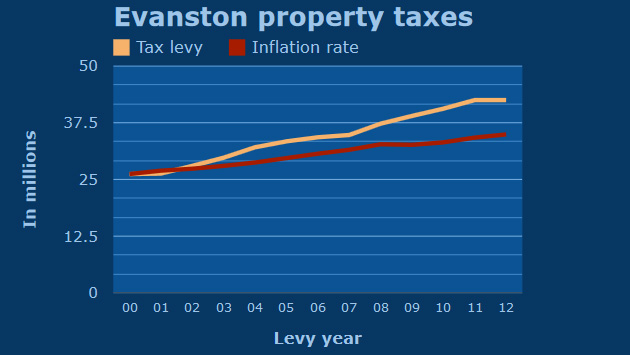 Evanston aldermen managed to hold the property tax levy flat for this year, something you may hear about from candidates seeking re-election next month.

But the City Council's longer term track record is a lot more painful for taxpayers.

Only once before in the last dozen years has the council managed to hold the line on property taxes from one year to the next.

And, for the period as a whole, property taxes have gone up at nearly twice the rate of inflation, a trend that has accelerated slightly during the term of the current City Council.

The property tax is the city's largest single source of revenue, but brings in less than 20 percent of all the city's income.

(The tax year marked on the chart is the year the tax was levied, or ordered, by the council. That tax is paid by taxpayers the following year. So the 2012 levy funds the city's 2013 budget. Data for the chart is taken from annual city budget documents available online and from the inflation calculator of the federal Bureau of Labor Statistics.)