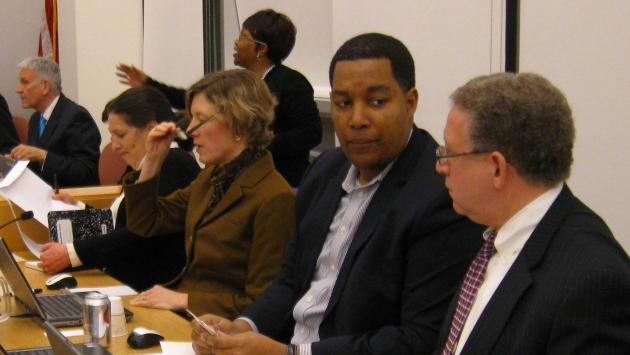 Evanston/Skokie’s two school boards are not yet sure whether they even want to talk more about consolidating the two districts after putting it on the agenda for Tuesday night’s annual combined meeting of the two boards.

Each year about this time, the boards of elementary school district 65 and high school district 202, which cover the same territory, encompassing all of Evanston and a small portion of Skokie, take part in a combined meeting that alternates between the high school and the District 65 headquarters.

This year it was District 65’s turn to play host, so the meeting was chaired by its president, Katie Bailey. On the agenda was a presentation by Erika Lindley, executive director of Ed-Red, a Park Ridge-based lobbying group for schools in the north and northwest Chicago suburbs.

Lindley noted that Illinois Gov. Pat Quinn has signed legislation that created the School District Realignment and Consolidation Commission to make recommendations about ways to reduce duplication of efforts, lower the property tax burden, and determine the cost savings of consolidation. The group’s report to the legislature is due July 1.

To date, she said, the commission has found that school district consolidation is “incredibly complicated,” although she said its emphasis has been on consolidating small rural districts, serving student bodies that were too small to provide a full-service educational package for students. Evanston’s consolidation would not fit that mold, she noted.

Lindley warned that the emphasis on consolidation should be on improving the educational product, not on reducing costs. In fact, the commission concluded that it would cost upwards of $3.7 billion over a four-year period to consolidate all of the state’s dual school districts, she said, although she could not verify how that number was calculated.

In the discussion that followed her presentation, board members appeared to agree that it should not consider consolidation unless it held out promise for improving the educational experience for the district’s students.

In the past, it has been assumed that consolidation would require teacher pay scales for District 65 to be brought up to the same level as the higher pay for District 202 teachers. Lindley said the state permits that to happen but does not require it. A consolidated salary schedule would be determined by negotiations at the local level, she said.

Bailey said that she and District 202 President Mark Metz have been poring over files pertaining to previous consolidation efforts in the district and noted that in the early 1990s, a consolidation proposal was turned down by the state because it failed to demonstrate conclusively how consolidation would benefit the students.

District 202 member Jonathan Baum, the only person who has served on both boards, expressed surprise that the consolidation discussion was on the agenda for Tuesday’s meeting “because I don’t think we’re ready to have that discussion.” Rather, he said, they should talk about whether they want to talk about consolidation.

Jerome Summers, District 65, proposed that the time and efforts of the two boards and staffs would be better spent on emphasizing the articulation and collaboration between the two districts.

Lindley noted that there was some money at the state level to pay for consolidation studies at the local level, to which Richard Rykhus of District 65 responded that if those resources were available that perhaps the local districts should take advantage of those funds to conduct a consolidation study for Evanston.

After asking for volunteers from the two boards to meet to recommend further action on the topic, Rykhus and Tracy Quattrocki from District 65 and Deborah Graham from District 202 agreed to form a study group to consider the next steps. Bailey invited other members to participate if they had an interest.

The rest of the meeting was devoted to a presentation by administrators, department chairs, and coordinators on curriculum alignment efforts by the two districts in reading, language arts, social studies, humanities, middle school science, and biology. Purpose of the curriculum alignment is to ensure that District 65 students are well positioned to succeed in high school.

Top: District 202 Board members settle in before the start of the joint meeting of the school boards