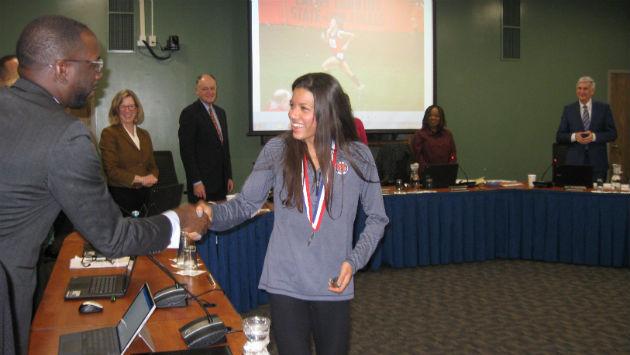 Enyaeva Michelin was honored at a meeting last week of the Evanston Township High School Board of Education for achieving what Athletic Director Chris Levatino said was the greatest female cross-country achievement in the school’s history. But that was only part of the story.

Sure, by running three miles in 16 minutes and 30 seconds, she was the state runnerup in the 2017 cross-country state finals, the first girl at ETHS to place in the finals since Stephanie Goodrich ran 10th in 1991.

But what was not mentioned, as she shook the congratulatory hand of each board member, was that she is the daughter of Don Michelin Jr., the school’s assistant track coach and head cross country coach, and the granddaughter of Don Michelin, Sr., who coached at ETHS from 1986 to 2003, then returned in 2009 after serving as principal of Haven Middle School in Evanston’s District 65.

Oh, yes, and the elder Michelin is also a member of the Illinois Track and Cross Country Coaches Hall of Fame.

Now in her senior year, Enyaeva has committed to enroll as a freshman next year at the University of North Carolina.