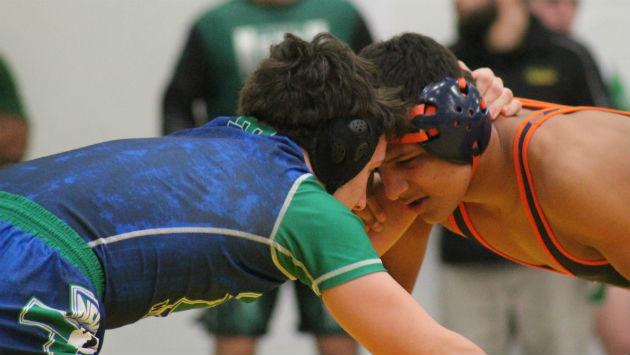 Ramin Abraham almost ran out of gas trying to climb back to the top of Central Suburban League wrestling Saturday. But the Evanston junior made it — barely.

Abraham staggered at the finish, but scored a 10-8 victory over Glenbrook North’s Trent Williams in the title bout and repeated as league 220-pound champion at the CSL Tournament hosted by Maine West.

Abraham became only the second ETHS wrestler to ever score back-to-back titles — along with David Rivera-Kohr at two different weights in 2015 and 2016 — at the conference tourney, and joined senior teammate Adrian Bytyqi, the 170-pound champion, in leading the Wildkits to a 4th place finish in the team standings at the 12-team event.

The Wildkits sent 6 individuals to the finals, but only Abraham and Bytyqi were able to pull off first-place finishes. Dylan Kull (132 pounds), Anjual Joyner (138), Ricardo Salinas (152), and Rafael Salinas (160) settled for runnerup finishes, Izzy Fox placed 3rd at 182, and contributing 4th place finishes were Van Rutter (195) and Jacob Vice (113).

In just his third year competing in the sport, Abraham is still learning the ins and outs of wrestling, including how to cut weight without having an impact on his stamina. “I was a pound and a quarter over (220) yesterday, so I didn’t have anything to eat or drink so I could make weight,” said Abraham after improving to 15-0 on the season. “I knew after the semifinals (a 24-9 technical fall over Maine South’s Sean Kelly) that my body wasn’t feeling right.

“I got really tired in the last match. I wasn’t at my best and I’m not proud of the way I finished. My goal for the tournament this year was come in and dominate, and I did that in my first two matches. I’ve changed my mindset this year and I’m really enjoying competing now. I just have to watch my weight, watch my diet — and not stuff myself.”

Abraham mustered enough energy to score 4 takedowns against Williams, then hung on after building a 10-5 advantage early in the third period.

The Evanston junior’s stamina is still a work in progress, considering he missed 6 weeks (twice what he thought the recovery period would be) with a broken finger and only recently returned to the mat.

“Considering that Ramin is coming back from an injury and still working on his conditioning, winning today is no small feat,” praised ETHS head coach Rudy Salinas. “His wrestling IQ is really improving, he scored back points in the earlier rounds he normally wouldn’t have scored, and he’s also improved on his feet. But he knows he can still get better, too.

“Adrian keeps setting goals and checking them off his list this year. Something clicked for him in the last three minutes of his match (4-2 over New Trier’s Russell Sanchez), and those last three minutes were different once he realized just what he was seeing out there. When we call ‘heavy’ that’s the setup we do to get their offense going, because he was not putting pressure on that guy.”

Bytyqi and Sanchez, who met just a week ago in a dual meet with the ETHS senior also prevailing, spent most of Saturday’s 6-minute showdown locked together in the middle of the mat. But Bytyqi did score all 4 points in the second period and that was enough to secure his 36th victory against only 5 defeats this season.

It marked the first varsity tournament Bytyqi has won in his career after less-than-satisfactory performances at both the Rus Erb and Wheaton Warrenville South tourneys earlier this season. He whipped Maine South’s Clay Cichowski 10-3 and pinned Mohammed Sami of Niles West in 2:26 to advance to the finals Saturday.

“I think being locked up like that is an advantage for me, because I’m pretty good at neutralizing people,” said the Evanston senior. “But once I listened while the coaches were yelling at me to snap, snap I knew if I went heavy on him, I’d break him down.

“I messed up in the finals at the Rus Erb tournament (in December) and I learned from that. I could have shot more on him today, but in a match like this (against a foe he’d already defeated) I was just waiting for him to make a mistake.

“Winning the conference is really huge for me. I finished 3rd last year (and compiled enough points to earn an all-conference designation), but I really wanted to be all-conference again and make it undisputed (CSL tourney champs are automatically listed as all-conference). We wanted to win as a team — we have a lot of young kids who are still growing and doing an amazing job in the lineup — and I think we proved we’re a good team today.”

At 132, Kull couldn’t maintain his early momentum after building a 4-1 lead against Maine West’s Arsalan Afshar and suffered an 8-5 defeat. Maine South’s Eugene Lee scored a major decision, 17-6, over Joyner in the finale at 138.

New Trier’s Jack Tangen improved to 35-1 with a fall against Ricardo Salinas in 4:51 at 152, although the Evanston freshman only trailed 3-0 at that point. Rafael Salinas had to forfeit in the 160-pound finals due to an injury after scoring wins over George Papagiannoupouli of Glenbrook South (7-0) and Bayne Kiser of New Trier (5-1) in earlier rounds.

“We had 6 finalists today and that might be the most we’ve ever had. It was a successful tournament and we got what we were looking for out of it,” said Coach Salinas.