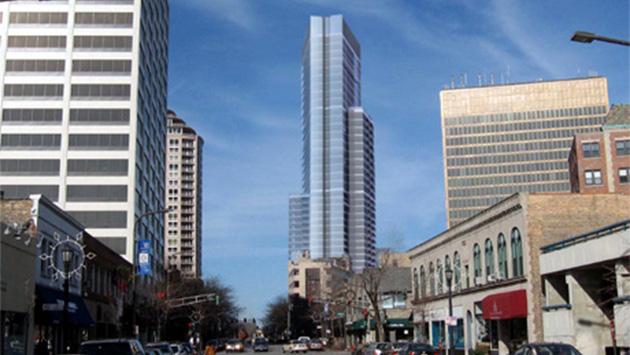 The Evanston City Council Monday postponed debate on a time extension for the planned Fountain Square tower for two weeks because two aldermen were absent from the meeting.

Developers of the 35-story project, approved in 2009, are seeking a three-year extension of the looming Dec. 31 deadline to begin construction.

The vote on the extension for the 708 Church St. project is expected to be close — with six yes votes required for approval.

At least ten residents signed up to speak about the issue Monday night, but most decided to hold their comments until the next meeting, as did the project's developers.

Two residents, Glenn Gray and Hank Goldman, said before the meeting that, as members of the Evanston Committee for Responsible Development, they've opposed the tower from the start.

Gray said, if alderman grant the extension, they'd "ensure Evanston will have the oldest new building ever built in history."

"If alderman believe this should happen, that it's good for Evanston in their hearts, they should demand [the developers] start over and make a new, high-tech building," he said.

Davis Street resident Arthur Altman said construction of the tower would disrupt bike paths and negatively affect commercial business in the area. He also questioned the need for more condo units in the city.

"If you keep building buildings, this is turning into a midtown Manhattan type of thing," he said.

The tower only received the minimum six votes it needed for approval in 2009, and six seats on the council have changed hands since then.