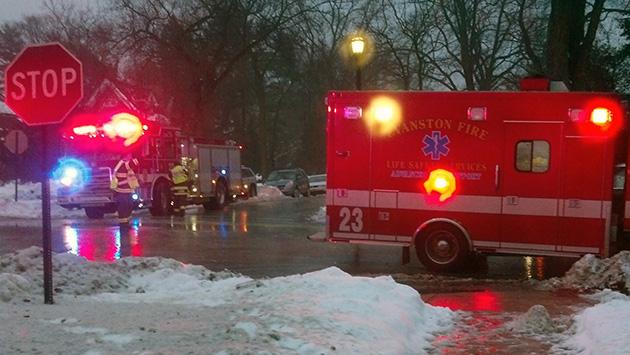 Evanston police have responded to a flurry of accidents during the afternoon rush hour as drivers lost control of their vehicles on icy, rain-slick roads.

What was apparently the biggest pile up occurred at Lincoln Street and Ridge Avenue, where a police cruiser was among the vehicles involved in a cascading series of at least three accidents as drivers lost control on the sloping road on either side of the CTA viaduct at the intersection.

Other accidents have been reported at several locations around town and police have switched to their emergency accident plan — in which, rather than waiting for police to respond to the scene, drivers in non-injury accidents are asked to drive to the police station to report the crash.

With the weather service reporting the temperature at 37 degrees and rain falling, the snow and ice left on streets from the storm earlier this week has become extremely slippery — especially any place in town where there's a hill.

Salt trucks are on the roads, but so far haven't been able to get ahead of the increasingly icy conditions.