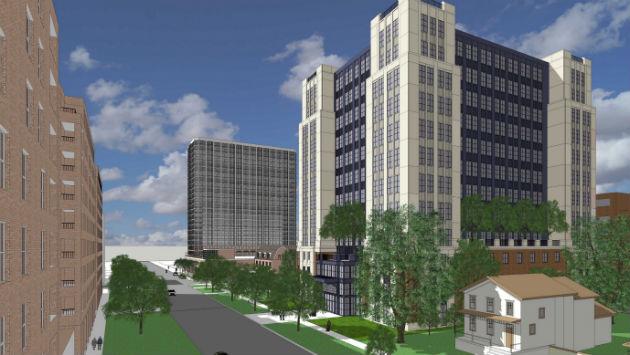 Evanston’s Plan Commission Wednesday night postponed action on a planned office building in the 1700 block of Chicago Avenue until January after receiving a request for delay from the head of the condo association for another building on the block.

The head of the association representing owners of the Lakeview Terrace condos at 1738 Chicago Ave. said, in a letter read by Plan Commission Chair Colby Lewis, that the group needed additional time to poll its members about the office building project.

The project has been under consideration by the city for roughly two-and-a-half years.

Plan Commission rules permit any property owner within 1,000 feet of a planned development to request one continuance of the commission’s hearing on a project.

The City Council asked the developers to come up with a plan to turn the city-owned parcel now used as a surface parking lot into an office building that would bring more workers into the downtown area to stimulate more business for downtown merchants.

The proposed 13-story building has four floors of parking and nine office floors that are expected to house about 500 new workers.

One sticking point in the proposal is that the City Council set a requirement that the developers replace the 74 public parking spaces in the lot and that the zoning code calls for 213 parking spaces for an office building of the size proposed.

Providing a total of 287 parking spaces on the footprint of the planned site with the setbacks called for in the building’s plan would require a parking deck roughly 10 stories tall before reaching the proposed nine floors of offices.

Since the City Council also wanted a total building height of just 11 stories, it became obvious that the goals of bringing a large number of new office workers downtown, fully replacing the public parking provided by the open lot and minimizing the building’s height were in conflict.

The compromise proposed by the developers is to provide 112 parking spaces on site and lease another 122 spaces in the city-owned Chuch Street garage across Chicago Avenue from the site.

The developers have presented traffic studies which indicate that with the existing unused capacity of the underground garage at the Evanston Public Library the new building’s public parking would be sufficient to meet the demand.

But Ben Schapiro, who heads the library board, questionned at Wednesday’s meeting whether the traffic study adequately accounted for varying parking demand at the library garage, which, he said, can be very heavily used depending on whether meetings are being held in the building.

Asked by Plan Commissioner George Halik what the typical amount of parking is for new office buildings, developer Greg Stec said the ratio is roughly one parking space for every 1,000 square feet of rentable office space.

Given that this planned building is located just a couple blocks from two rail stations, Stec said, he believes having 112 spots for 130,000 square feet of rentable space is right around the industry norm.