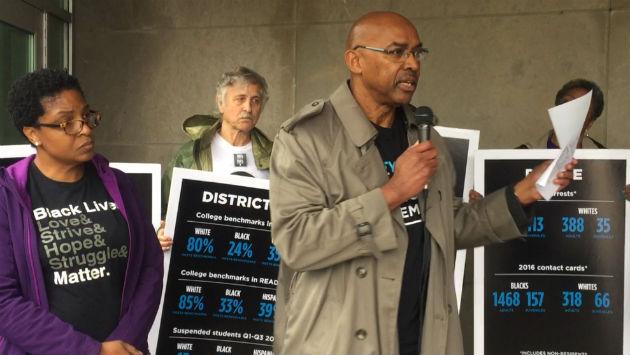 OPAL board member Roger Williams speaking during a demonstration at District 65 headquarters in 2017.

Board members of OPAL, the Organization for Positive Action and Leadership, announced in a newsletter Saturday that the Evanston activist group is disbanding.

OPAL was formed in 2014 with the goals of improving Black student achievement in Evanston/Skokie District 65 schools, electing equity-focused candidates to local school boards and achieving racial equity in city government.

In this year’s local elections it made contributions to the aldermanic campaigns of Clare Kelly, Darlene Cannon, Nick Korzeniowski, Diane Goldring, Bobby Burns, Tom Suffredin, Mary Rosinski and Devon Reid. Half of those candidates — Kelly, Burns, Suffredin and Reid — won their races.

It also supported clerk candidate Misty Witenberg, who lost her write-in campaign, Mayor Daniel Biss and District 65 school board candidates Soo La Kim and Marquise Weatherspoon. Kim won and Weatherspoon has since been appointed to fill a vacancy on the board.

The COVID-19 pandemic has disrupted efforts to track student performance with achievement tests, but from 2015 through 2019, test scores for all student groups in District 65 initially declined and only partially recovered from those losses by the end of the five year period, with Black students still substantially trailing their white peers.

The newsletter gives “live changes and other commitments” as the reason for disbanding the organization.