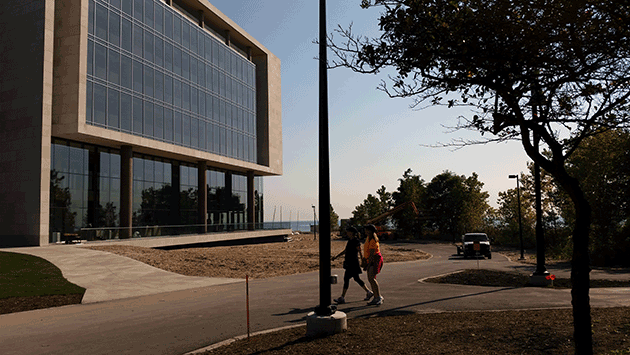 The president of a neighborhood group has denounced Northwestern University's plan to resubdivide its main campus as an effort to "gerrymander" the property to avoid oversight by Evanston's Preservation Commission.

In the letter, Southeast Evanston Association President Sheila Sullivan says the university "has a history of insensitivity to the impact it has on its neighbors and its surroundings."

The subdivision plan, first reported by Evanston Now last month, would divide what is now two massive lots east of Sheridan Road into six lots — one large one without any landmarked buildings — and five smaller ones that would contain all of the dozen landmarked buildings on the campus. 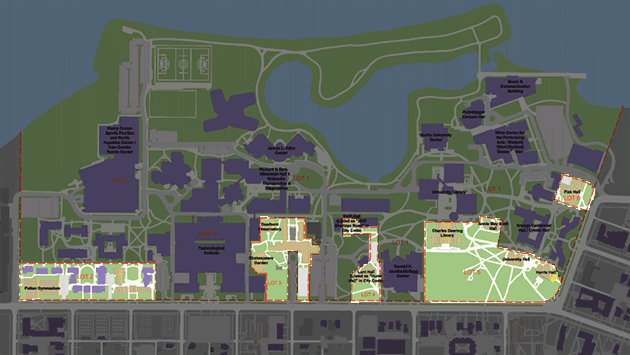 A map of the original resubdivision plan, with lots containing landmark structures highlighted.

As detailed in a memo from Bonnie Humphrey, the university's director of design and construction, the proposal was revised slightly after a workshop session with the Preservation Commission Feb. 10 to expand the size of the Swift Hall lot to include additions to the original building and to slightly expand the size of the lot that includes Harris Hall and three other landlmarked buildings. 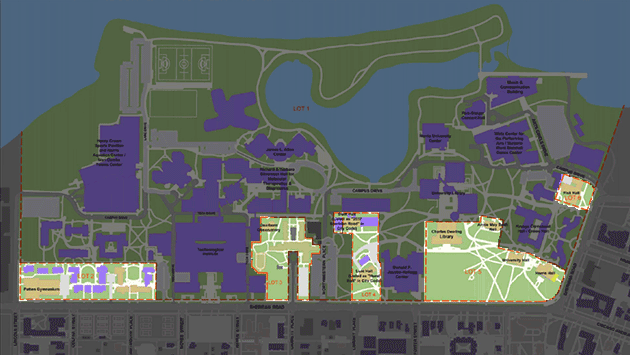 The revised resubdivision plan as submitted by the university.

The Preservation Commission is scheduled to vote on the proposal Wednesday evening.

City staff is recommending approval of the plan with two further modifications. One would further expand Lot 4 northward to the southern edge of the existing parking lot north of it.

The other would require the university to "share information" with the Preservation Commission during the design phase for any "significant project" within 200 feet of Sheridan Road.

In an interview with Evanston Now, Mayor Elizabeth Tisdahl, who appoints members of the Preservation Commission, called the resubdivision idea "a fair proposal that removes a lot of potential conflicts" over development.

Tisdahl said it's "a reasonable thing to take a look and figure out which portions of the campus make sense for Preservation Commission review."

Tisdahl says she "feels terrible whenever the City Council ends up overruling a board or commission, because I appoint them."

"I think this change will diminish potential conflicts," she added.

Sullivan, from the Southeast Evanston Association, called the schools new visitor's center on Sheridan Road "a striking example" of the university's insensitivity.

That project was approved by the City Council over the Preservation Commission's objections, and the completed building won praise from the Chicago Tribune's architecture critic.

Sullivan analogizes the Preservation Commission review of campus projects that don't involve landmark buildings to the oversight it has of properties that are in Evanston historic districts but are not themselves landmark properties. However, the university campus east of Sheridan Road is not included in a city historic district.