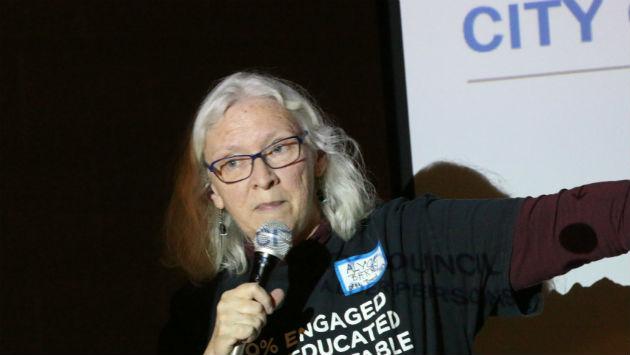 Leaders of the Organization for Positive Action and Leadership focused on proposed cuts to Evanston’s youth, recreation and human services programs at a meeting Thursday night at Grace Lutheran Church.

The organizers also said the planned layoffs of 17.5 workers would disproportionately affect workers who are black and live in Evanston.

The chart above shows the racial and ethnic distribution of Evanston residents and full-time city employees. About 22 percent of city workers live in Evanston.

The OPAL data doesn’t consider the race or residency of the last occupant of the 21 vacant positions also scheduled to be trimmed from the budget.

Sixteen of those positions come from the police and fire departments, which tend to have few city residents, and, in the case of the Fire Department, are disproportionately white.

OPAL President Roger Williams said budget cuts would affect “some of the most vulnerable and poor people” in the city.

He noted plans to end city funding for the Gibbs-Morrison Center at Church and Dodge and complained that “it was never set up to thrive” with “staff but no programs, no way to generate revenue.”

And he complained about plans to reorganize the city’s program for high-risk youths and young adults. “This program has been working very well,” Williams said. “If it ain’t broke, why fix it?”

Kevin Brown discusses his dismay about plans to move him to a new position.

Ken Cherry, manager of the Fleetwood Jourdain Center, would become the new head of the youth program.

OPAL Vice-President Oliver Ruff criticized the planned $821,000 in cuts in the city’s Health Department, which would lose nearly a third of its staff.

And Board Member Tiffini Holmes objected to planned cuts of $250,000 from funds the Mental Health Board distributes to local agencies, saying those programs support over 5,000 Evanston community members.

Alderman Ciciely Fleming, 9th Ward, an OPAL founder, urged the few dozen residents in the room to raise questions about the budget before its scheduled adoption next month.

“Don’t come to me in January and complain about the budget,” she said. “Do it now.”