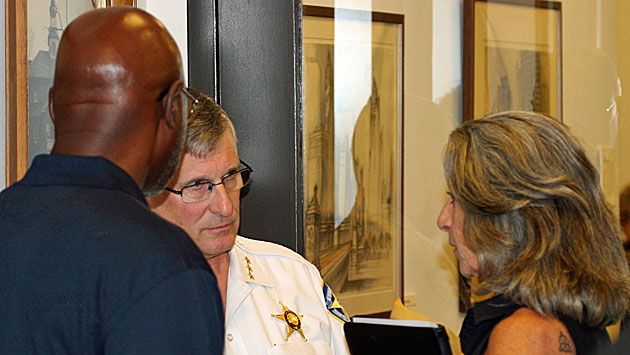 With poll Despite complaints from some neighborhood residents, Evanston officials are moving ahead with plans to set up a police outpost in the Dominick's supermarket in the Evanston Plaza shopping center.

With poll Despite complaints from some neighborhood residents, Evanston officials are moving ahead with plans to set up a police outpost in the Dominick's supermarket in the Evanston Plaza shopping center.

At Monday's City Council meeting, John Bushnell, of 1805 Crain St., said having police in the store at Dempster Street and Dodge Avenue would reinforce fears among visitors that it's a high crime area.

The Rev. Blair Hall, of 1215 Dodge Ave., said problems with crime elsewhere in the neighborhood are much more severe than at Dominick's. And she said the supermarket should pay for its own security.

Nancy Floy, who owns the Heartwood Center at 1818 Dempster St., said statistics don't support claims that there's a big crime problem in the neighborhood, but the outpost would make people think there is.

And Dickelle Fonda, of 1220 Darrow Ave., said the decision to open the outpost had been made without sufficient consultation with the community.

But Alderman Peter Braithwaite, whose 2nd Ward includes the shopping center, said police had conducted three community meetings about the outpost concept and that he's planning another meeting at Perla Cafe, 1813 Dempster St., at 7 p.m. on Thursday.

He listed four shootings within a couple blocks of the shopping center over the past year that left three people dead and said "crime makes me afraid as well."

"The outpost isn't the only solution," the alderman said, but it can be part of a solution that also includes things like more reading programs for kids, better lighting and more economic development.

Braithwaite also distributed a statement from Dominick's officials saying the outpost would let officers respond more quickly to emergency situations in the community and that it wouldn't change the store's own security efforts.

The company statement said the firm is covering the cost of constructing the outpost and noted that the company set up a similar outpost in cooperation with Chicago police several years ago in its store at Clark and Howard in Rogers Park.

Police Chief Richard Eddington said theft of liquor by juveniles has been a major issue at the store. (Monday's crime report included two more such thefts that occurred last Wednesday and Thursday.)

"Having an officer periodically present in the store will be a major deterrence and will let officers interact in a non-crisis setting with people," the chief added.

He said the Dominicks outpost would just be a desk and a phone and that officers on duty on the beat in the area would periodically stop by. "It's not a situation that there will always be an officer there," Eddington said.

No aldermen objected to the outpost proposal, and since it requires no additional spending by the city, it appeared the plan will move ahead without formal City Council action.

She said she often sees the store's security employees "out on the sidewalk talking on their cell phones." She suggested the store should be encouraged to hire off-duty police officers to beef up its security operation.