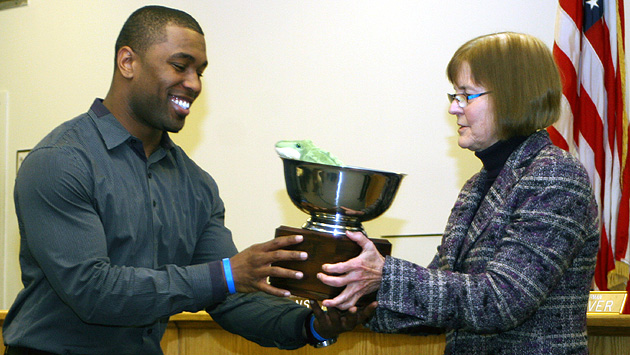 Notes the recent opening of a wine bar in a city-owned building on Howard.

Says the increase in cost of the theater reconstruction has made original agreement with City Lit theater unfeasible.

Says now considering a lease arrangement, instead of lease purchase. Says if City Lit can't go through with the plan, the city would look for other potential tenants.

Says should be able to finance the project over the 10 year period remaining on the Howard-Ridge TIF.

Says have reached a "put up or shut up" stage with City Lit and need to reach agreement with them within the next three or four weeks.

City Manager Wally Bobkiewicz says he still has every confidence that a deal can be reached with City Lit.

Says redevelopment is hard work and have to take risks. Never said this was a slam-dunk. Have to take reasonable risks.

Says benefits to south Evanston community are too great to do anything but move forward.

Assistant City Manager Marty Lyons says balance in the TIF is in $1.3 million.

Alderman Jane Grover, 7th Ward, asks whether it's an affordable project for City Lit, given the much greater cost.

Griffin says it's not feasible at this point. Said had contemplated purchase for the city's purchase price of the building (around $325K). Doesn't believe city can afford to cover the whole cost of the improvements as a gift to City Lit.

Doesn't think can find any entity to buy the theater back from the city in the next few years.

Griffin says believes the theater would provide a hub of activity on Howard.

Bobkiewicz says he believes the city really needs to move forward with the renovation. Says it's an opportunity to grab the momentum that hasn't been present in two decades or more.

Says if the circumstances were simpler, wouldn't need the TIF district. Says city has money in the back for it.

Alderman Ann Rainey, 8th Ward, says issue of bonding is always an issue — but bonding is what triggered the great increase in value in the downtown TIFs.

Rainey says she sees this as the most important activity of her entire 25 years on the council.

Says this will generate the absolute vibrancy that the street needs.

Says there's a bias and prejudice against Howard Street.

Says there was so much business at the Ward Eight bar Friday that they had to turn people away.

Says there now is a proposal for a restaurant at Howard and Callan that she anticipates will be very successful.

Says there have been theaters on Howard Street before and there can be again.

Says the added requirements to satisfy Actors Equity rules — and make the theater capable of handling more sophisticated productions — is largely responsible for the increase in the cost estimate for the project.

Alderman Coleen Burrus, 9th Ward, says she was nervous when it was a $600K project- when its a $1.6 million project and there's not a viable tenant for it — she's having a very hard time supporting it. "I just don't see the numbers here," Burrus says.

Alderman Delores Holmes, 5th Ward, says she's going to support the project. Says just shouldn't get off the horse in the middle of the stream. Don't like the idea that the costs have increased so much. But understand that if want a successful theater need to make that happen. Think staff is wise enough to find somebody else if City Lit can't do the project.

Alderman Jane Grover, 7th Ward, says she's support it to send it on to the full council. Says would like to know more about what's happening on the Chicago side of the street as well and find ways to do complementary devleopments.

Also wants more information on how this fits into larger plans for theaters and arts projects across the city.

Planning and Development meeting to start at 7:15 pm.