An alderman, a former alderman and two citizen-activists met in a TV studio Thursday night and traded barbs about whose plan for solving Evanston's Civic Center problem would cost taxpayers more money. 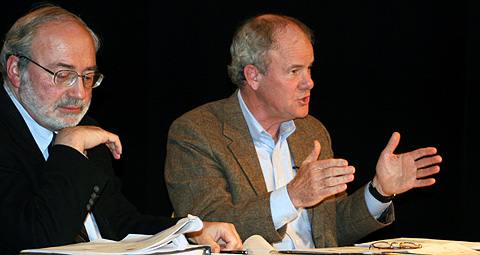 The activists, John Kennedy and Elliott Dudnik of the Friends of the Civic Center, would like to see the existing building at 2100 Ridge Ave. rehabilitated, with the work likely done in phases over several years.

Mr. Dudnik, an architect, says a $15 million rehab project could be funded through a bond issue that might cost taxpayers $1.5 million a year for the 20-year life of the bonds. The Friends have at various times estimated that different levels of rehab could be accomplished for between $7 million and $13 million.

They estimate a new building would cost around $30 million. But they claim that by selling the existing site to be redeveloped for housing and creating a tax increment financing district to grab all the property tax revenue from the new development for 23 years, there would be no net cost to city taxpayers.

However they leave out of that calculation the fact that city taxpayers are also school taxpayers and that, without the TIF, new construction on the Civic Center site could reduce the school tax burden on residents.

Various aldermen have speculated that a rehab would cost from $20 million to over $30 million — far more than the estimates from the citizens group.

While city consultants have studied several possible new sites, the aldermen have failed so far to find any they like that also work financially.

"We don't have a plan," Ald. Bernstein said, "We're trying to speculate about what might happen. Whether we build or rehab it's going to cost money. The real problem is that if we rehab we don't have funds from which to draw to fund the project."

But the high figures are based on life in northwest suburban Schaumburg and the low ones are based on high-rise condos unlike the garden-style units that might be built on the Civic Center site. So it wasn't entirely clear whether either set of numbers fits.

Limit growth?
Mr. Kennedy said there's a need to limit growth in the city, suggesting new construction has overburdened the city's facilities and ability to deliver services, and that a rehab plan should be favored for that reason.

But Mr. Newman noted that despite recent growth, the city's population is several thousand below the 80,000 peak reached decades ago. "If all this growth is so terrible, then why are people moving here and spending money, and why are property values now rising?" he asked.

Where to put a new center?
The aldermen reportedly have considered a variety of possible new sites in executive session meetings of the Civic Center Committee. But they've provided little public indication of which locations they prefer.

Mr. Newman said that if he were still on the council, "I would look all over Evanston. Why not go to a part of the city that hasn't been doing as well as downtown or the lakefront? Whether we looked west or south, I think it would be an opportunity to use the Civic Center to be an economic stimulus. One of our problems is having some council members fixating on downtown."

The two-hour cablecast debate is scheduled to be rerun on Channel 6 at 5 p.m. on Saturdays and 6 p.m. on Sundays between now and election day, April 17.