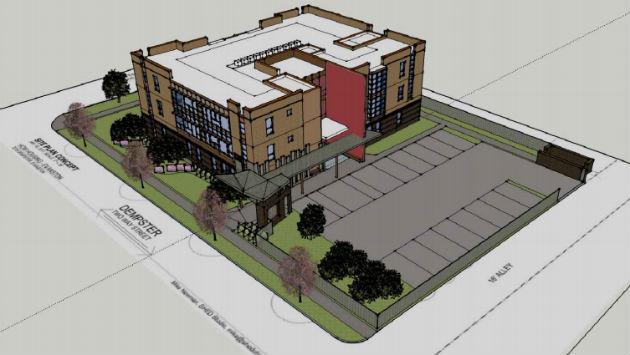 The approval came following implementation of several revisions to the design suggested by city staff at last week’s committee meeting. 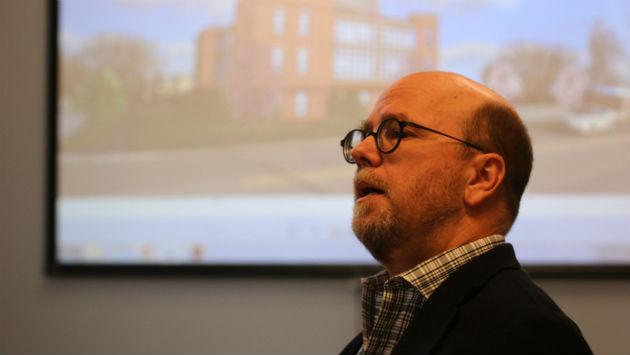 Architect Michael Newman said the plans now call for use of conventional modular brick rather than the larger utility brick and that an entrance has been added on the Pitner side of the building to eliminate the need for delivery vehicles to park on Dempster.

Newman also said the plan now is to use a single color of brick, in a reddish hue, for the building, rather than the two colors of brick shown in earlier renderings.

Some neighbors had complained that their basements flood during storms and voiced fears that the new building, planned to replace a single family home on the site, would aggravate flooding problems.

But project engineer Jason Green said the storm water detention system planned for the site should dramatically reduce runoff from the lot.

The existing runoff rate from the site, Green said, is almost 1,000 gallons per minute, running over the ground and into the street.

The development will include a storm water storage tank with a capacity of almost 30,000 gallons, he said, and it’s designed to release water into the sewer system at a rate of just 67 gallons per minute.

Lara Biggs, of the city’s Public Works Agency, said the city cleans public sewers in the area on a regular basis. She suggested that residents with flooding concerns call the city’s 311 number immediately during a storm if they experience flooding so a city crew can respond.

“It can be very challenging to figure out the source of the problem when it’s not happening,” Biggs said.

Often, she added, the problem is a result of seepage through a building’s foundation or downspouts that are connected to the private sewer line and back up.

“If the private sewer doesn’t have the capacity, the first place water goes is back into the home,” she said.

Planning and Zoning Administrator Scott Mangum said the project meets all zoning requirements for the R5 district it’s located in.

As a result, an upcoming final review by DAPR will be the last required city approval for the project.

But the developer, Housing Opportunities for Women, is seeking city funding for the project.

That request is scheduled for review at the Sept. 7 meeting of the Housing, Homelessness and Human Relations Commission. The funding plan will also require full City Council approval.