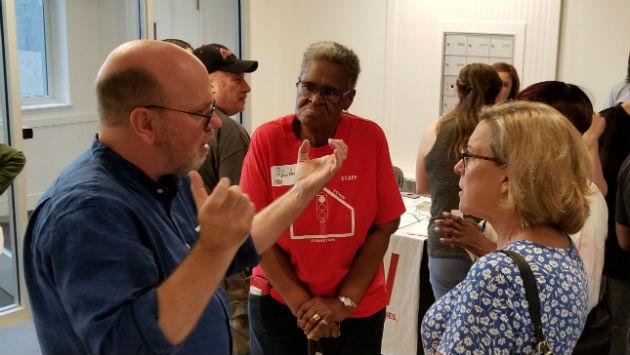 Several units have living rooms with large expanses of windows.

The three-story building has eight one bedroom and eight two bedroom apartments that range in size from 570 to 740 square feet. It includes 16 parking spaces in a lot built atop a large water retention tank designed to prevent flooding in the area.

The east side of the building, where the parking lot is nearing completion.

Site manager Tereta James says this will be the fourth building HOW owns and manages, and its first new-construction development. HOW already runs three buildings in Chicago.

Kitchens in the units have a wall of appliances and cabinets facing a counter that opens into the living room.

Persons interested in becoming tenants at the building can learn more about the application process at 1305Pitner.com.

A view of the building from the corner of Dempster and Pitner.

Plans to develop the property, also known as 2215 Dempster St., had drawn opposition from some neighbors.

Alderman Peter Braithwaite, whose 2nd Ward includes the site, said he was happy to see the project nearing completion, noting that people often say they want affordable housing, but then resist having it nearby.

In 2017 the City Council rejected a request for $550,000 in city funds for the project, but HOW was able to move forward with funding from state and federal low income housing programs.