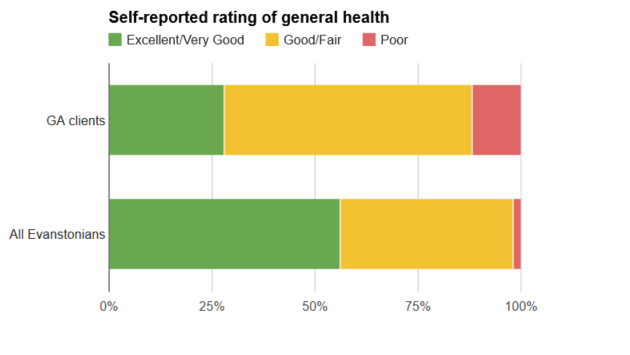 A new survey of general assistance recipients in Evanston indicates they have substantially more health issues that other Evanstonians.

The city's health department, the new home for the general assistance program in the wake of the dissolution of Evanston Township, surveyed the aid recipients earlier this year at an event at the Erie Family Health Center and compared the results to a health survey of the overall Evanston population conducted last year.

They showed that only 28 percent of general assistance clients report that their health is excellent or very good, compared to 56 percent of the general community.

The general assistance clients were also much more likely to be smokers — 60 percent, compared to 8 percent in the general population.

And they were far less likely to have health and dental insurance and a primary care physician than other Evanstonians.

More than 47 percent of GA clients said they had no health insurance, compared to less than 9 percent of other Evanstonians.

Thomas-Smith says her department is working to improve the health status of aid recipients by enrolling them in the County Care program through the Erie Family Health Center.

In addition to providing them with access to a primary care doctor, the program, she says, also reduces the medical expense reimbursements the city has to make, reducing costs to the city.