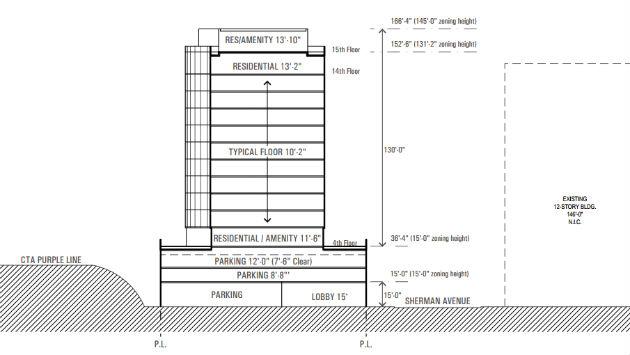 Ahead of a scheduled final vote Monday by Evanston aldermen on a planned development at 1450 Sherman Ave., Albion Residential has agreed to lower the income threshold for proposed on-site affordable housing units.

In a memo to aldermen, the city’s community development director, Johanna Leonard, says the new proposal calls for three units at 50 percent for households earning no more than 50 percent of area median income, six at 60 percent of AMI and 6 at 80 percent of AMI.

Initially the developer had proposed to meet the terms of the city’s inclusionary housing ordinance by making at $2.9 million payment to the city’s affordable housing fund. But after housing advocates pushed for providing units on site, the developer offered to provide 15 on site units instead.

The mix of affordable units now proposed would roughly match the mix of market-rate units in the building — with eight studios, four one-bedroom and three two-bedroom units.

The height and unit count in the building has been scaled down since the developer’s original proposal, so with the current 273 total units the developer would only be required to pay $2.7 million to meet the terms of the inclusionary housing ordinance.

Leonard also says that — given the $300,000 to $350,000 cost per unit of buildng new housing downtown — the city would not be able to develop as many units as Albion is proposing to include on site if it were to instead take the fee in lieu.

The memo also suggests that the Albion proposal would increase the number of income-restricted affordable units in census tract 8094 by more than 30 percent and further the goal of distributing affordable housing equitably across the community — especially in high-cost transit-oriented neighborhoods.