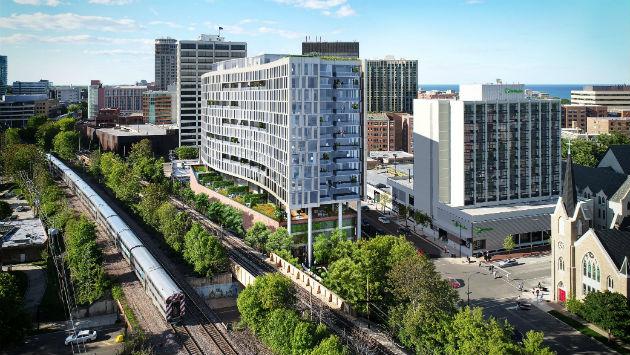 Albion Residential submitted formal plans to the city this week for its proposed 16-story rental residential development on Sherman Avenue in downtown Evanston.

A spokesman for the developers says they anticipate the project will be reviewed by the city’s Design and Project Review Committee next month, followed by Plan Commission hearings later this summer.

The design of the project, from Hartshorne Plunkard Architecture, has undergone some changes since preliminary plans for it were presented at a community meeting in May.

Perhaps most notably, the supports for the south end of the tower, where it would overhang a proposed pocket park, have been changed from two pillars to four.

The two-pillar design had drawn a significant amount of criticism at the community meeting.

But the curved design of the tower, which some residents at the public meeting had also criticized, remains in the new design. 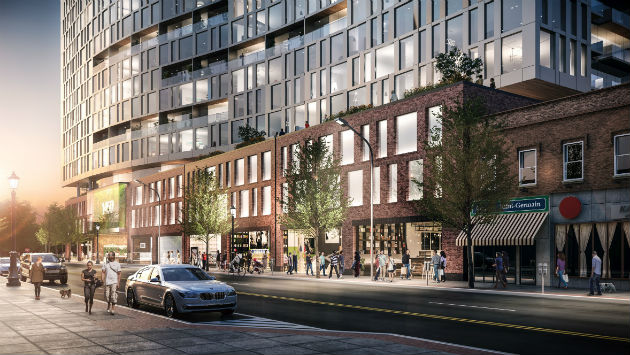 With 292 units, the Albion project is expected to generate $3 million for the city’s affordable housing fund and roughly $1 million a year in property tax revenue for the city, schools and other local taxing bodies.

That’s more than four times the property tax revenue generated by the current buildings on the site, which include the Tommy Nevin’s and Prairie Moon restaurants. 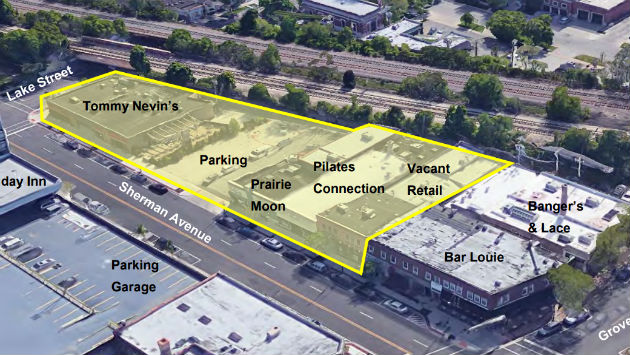 The new plans also slightly reduce the total number of units in the building, from 298 to 292, and shift the apartment unit mix to include somewhat fewer studios and more one-bedroom units.

Under the new plans 54 percent of the apartments would be studio or convertible units, 24 percent would be one-bedrooms, 20 percent two-bedrooms and 2 percent three bedrooms.

The developer’s plans indicate the new building, at 192-feet, would be the fifth-tallest structure downtown. The nearest taller building is the city’s fourth-tallest, One Rotary Center, at 1560 Sherman Ave., which reaches 237 feet.

Making use of the city’s recently adopted transit-oriented development allowances, the developers plan to provide a total of 172 parking spaces on site, including 10 for the ground-floor retail uses. That works out to a ratio of 0.56 spaces per residential unit.

Copies of the project documents are available on the city website.