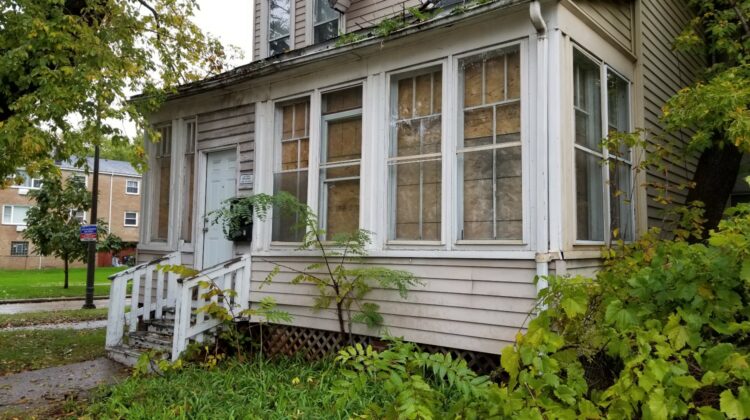 Ald. Bobby Burns told residents at his 5th Ward meeting Thursday night that he understands the owner of several vacant properties at the corner of Emerson Street and Jackson Avenue plans to have them demolished.

In late 2018 a developer submitted preliminary plans to build 44 condominium units in two five-story buildings on the seven adjoining properties.

While the zoning for the property would permit the five-story structures, neighbors in the mostly low-rise neighborhood organized in opposition to the plan and scared off the developer.

Then 5th Ward Ald. Robin Rue Simmons sought to have the area downzoned to bar developments more than three-and-a-half stories high, but that change was rejected by the Plan Commission and tabled at the City Council’s Planning and Development Committee.

Property owner Victoria Kathrein told the Plan Commission that she and her late husband started acquiring the rental properties 20 years ago with the intent of eventually redeveloping them based on the current zoning — which has been in place since 1993.

Kathrein, who had emptied the buildings of tenants in anticipation of the sale to the developer that fell through, then boarded up the buildings, and, Burns said, recently complied with a city requirement that the plywood used for the board up be moved from the outside of the windows to the inside, to improve the appearance of the property.

At the ward meeting, Tina Paden, a landlord who owns other rental properties in the area, complained that Kathrein’s properties “still look terrible.”

“It’s ridiculous and unacceptable and still looks like the ghetto,” Paden added, saying the appearance makes it difficult for her to rent her units across the street.

Under a city ordinance Kathrein will have to pay $105,000 in demolition fees to the city to get permits to tear down the buildings.