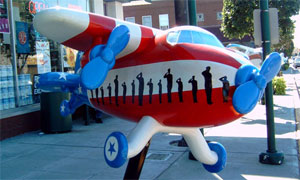 Evanston aldermen tonight are scheduled to vote on a proposal to direct the city’s Public Art Committee to explore coming up with something similar for Evanston.

Alderman Ann Rainey, 8th Ward, came up with the idea for a coordinated art project in Evanston’s business and commercial districts.

A memo prepared by city staff describes several possible flavors of the project.

One might have a common object representative of Evanston — a lighthouse, perhaps, cast in fiberglass with copies painted by local artists and positioned around the business districts.

Another could involve original art projects coordinated with the proposed upgrades to the CTA’s Purple Line stations.

Or it could involve individual pieces of public art designed to reflect the identity of each of the business districts.

At least two Chicago-area firms — AFS Fiberglass Studio and  Cowpainters — produce the fiberglass sculptures that could be used as the basis of a temporary art campaign.

The cows project, launched in Chicago in 1999, reportedly has been duplicated — often with other animals or objects as the subject — in hundreds of other towns, according to the staff memo. It says local artists are typically paid about $1,000 to paint each of the sculptures to be displayed.

Some towns have reportedly covered the cost of the project by auctioning off the sculptures, others have sought grant funding or imposed additional fees on building permits or come up with some other approach to cover the costs.

Above: A painted fiberglass replica of a tri-motor plane outside a shop in Lansing, Ill., part of an art project there, from the AFS Fiberglass Studio website.