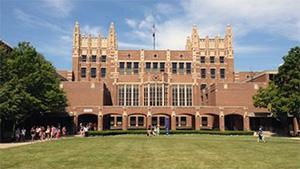 Evanston aldermen tonight may try to dodge a bullet on the "safe school zone" concept.

Evanston Township High School board members have been pressing the city for months to adopt rules that would make people subject to arrest for hanging out on street corners across from the school.

School officials say being able to order suspected troublemakers to move along or face arrest would enhance security for students.

But some neighborhood residents have objected — saying the plan would violate constitutional rights to move about freely on public streets and sidewalks.

A resolution drafted by Alderman Jane Grover, 7th Ward, for discussion at tonight's Human Services Committee meeting, lays out steps the city has taken to provide for safety at ETHS — including stationing two police officers there full time and deploying additional officers around the campus at dismissal time.

It also says the city is working to install blue-light security cameras around the campus, adding more and brighter street lights and pruning trees for enhanced visibility.

And, the resolution says, the city is inviting ETHS safety workers to participate in police cultural diversity training programs and providing targeted enforcement of school speed zone and cell phone use bans around ETHS.

The resolution notes that the state legislature gave the school power to enforce "safe school zone" regulations on its own campus nearly two years ago.

But it fails to address the expansion of the safe school zone to areas adjacent to the campus that school officials have sought — while saying the city is committed "to collaboration with ETHS to preserve and enhance" safety around the campus and the "enforcement of applicable state law."