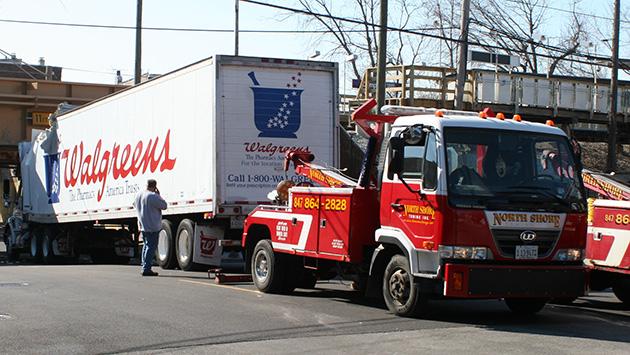 An Evanston city panel put a hold on renewal of the city's towing contract after an alderman this week complained that speeding tow truck drivers were "terrorizing people" by following too closely behind them.

"They're some of the worst drivers in the city, a real hazard," said Alderman Coleen Burrus, whose 9th Ward includes the North Shore Towing yard on Oakton Street.

"They need to be reminded that they should not be speeding on Oakton Street, or tailgating people," Burrus added.

North Shore, which was founded in 1979, has had a towing contract with the city for over 34 years, according to Rickey Voss, the city's parking division manager.

The proposed agreement the Transportation and Parking Committee was considering Wednesday night would extend an existing three-year contract for an optional renewal year starting in August. The extention would maintain current rates, at an estimated annual cost of just under $45,000.

Assistant City Manager Marty Lyons suggested adding a performance standard to the contract that would penalize the company if its drivers got over a certain number of tickets or received too many complaints from citizens phoned into the city's 311 service.

In response to a question from committee member Paul Giddings, Voss said that there are no other Evanston-based tow companies and that "it's hard to find a company within a close enough radius to the city to provide the service necessary — which includes vehicle storage as well as towing.

"North Shore Towing has all the facilities," Voss said, and it can meet the need for extra trucks when there's high demand.

Voss said he would meet with North Shore owner Robert Cole to discuss the issue, and added that residents concerned about the issue could also contact the Illinois Commerce Commission, which licenses the towing service.

"Complaints to them carry a lot of weight," Voss added.

The committee is scheduled to consider a revised version of the contract at its June meeting.