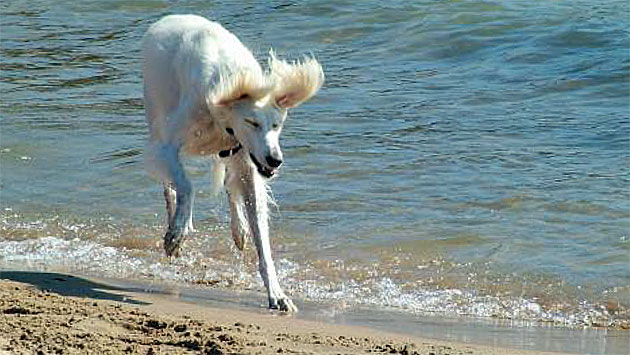 An Evanston alderman says the city needs to reform how it handles the needs of local dog owners.

A dog who doesn't know the hassle its owner went through to let it run on the dog beach (City of Evanston photo).

An Evanston alderman says the city needs to reform how it handles the needs of local dog owners.

Alderman Ann Rainey, 8th Ward, told the City Council's Rules Committee this week that she had just heard from a constituent who wanted to get a license for her dog, and get permits for the dog to use the city's pooch park and dog beach.

"She went to the collector's office today to purchase the dog license," Rainey said. "She had all the proper paperwork. It went smoothly, and the person at the counter was very courteous."

But then, she said, now that she had the dog license the woman said she'd like to get a permit for the dog park, and was told "You can't do that here. You have to go to the Robert Crown Recreation Center to buy that."

And what about a dog beach permit? "You can't do that here either. You have to go to the Parks and Recreation office down the hall for that."

"The Human Services Committee needs to take a look at this issue and fix it," Rainey said. "There's no reason why, when you go to the collector's office, you shouldn't be able to also pay for those other options."

And, Rainey suggested, the city also needs to look at the fees it charges. In addition to the $10 annual license fee for a dog, the pooch park permit costs $45 a year, and the dog beach permit costs $60 — or a total of $115 for a dog owner who wants all three.

Rainey said her constituent said that by comparison she could get a $10 dog license from the City of Chicago and for $5 more she could have access to any pet-friendly location — dog park or dog beach — in Chicago.

And, in addition, she could buy the Chicago permits at her veterinarian's office where she has to go anyway to get the dog the shots needed to qualify for a license.

"We just make it very complicated for people," Rainey said. "We need to try to get everybody at one desk paying one amount."