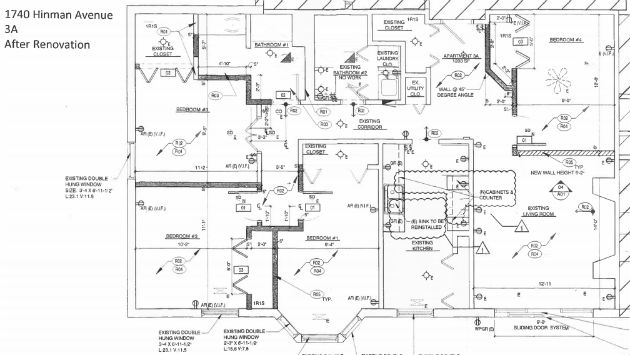 City staff plan to ask the City Council’s Planning and Development Committee Monday night for direction on whether they think the city should modify its rules about such alterations.

He’s gained approval from city staff to convert one two bedroom unit on the third floor, which has about 1,462 square feet, into a four bedroom unit, and is requesting approval for a similar conversion of a second floor unit.

Halim says he hasn’t decided yet whether to convert other units in the building to the new configuration.

The building was constructed in the late 1970s and had been planned as a condominium property, like the matching building to the south at 1730 Hinman, but its units have been used as rentals and a previous owner of all the units recently dissolved the condominium association.

An owner of one of the condos at 1730 Hinman, John Lionberger, told members of the city’s Inclusionary Housing Ordinance subcommittee Wednesday that he was worried about his property values if the conversaions go forward. He said the changes could double the number of residents and cause parking problems on the block.

Fiske said such changes tend to attract students as tenants, and she claimed that it would reduce the amount of affordable housing in the neighborhood.

One newly-remodeled four-bedroom unit at 1740 Hinman is currently listed for $3,600 a month.

A diagram showing the renovated unit.

The proposed changes would split an existing large master bedroom into two smaller bedrooms and create a new bedroom out of what’s now the dining area in the combined living-dining room.

The dining area lacks a window, so the wall separating the new bedroom from the living area would be only 5-feet-2-inches tall to provide light and air for the bedroom.

Community Development Director Johanna Leonard says that with no increase in the total number of dwelling units in the building the zoning code currently doesn’t require any increase in the number of parking spaces to accommodate the renovations.

And the renovation plan also meets building code provisions that require that each unit have at least one room of 120 square feet with all other rooms being at least 70 square feet. The renovations would give the modified units a living room with more than 160 square feet and each of the bedrooms would be larger than 100 square feet.

In a memo to aldermen, Nyden suggests that if the committee decides to seek any changes to the rules, they could refer the issue to the Plan Commisson to develop a specific proposal for amending the city code.