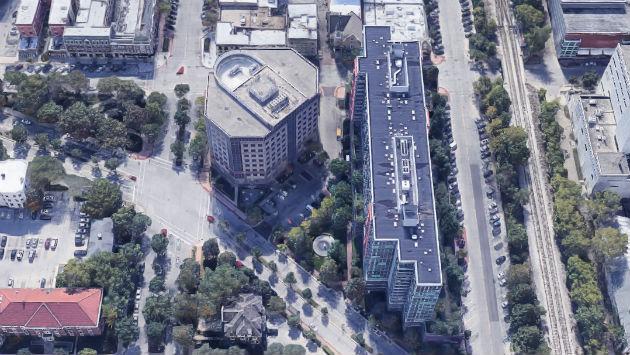 Aldermen beat a hasty retreat Monday night from the concept of closing Elgin Road downtown after residents of the Optima Horizons condo development at 800 Elgin claimed it would destroy their property values.

Although the Optima Horizons building also has automobile access to Clark Street and Benson Avenue, an attorney for the building’s condo association claimed the closure of Elgin would be a taking violating the property owners’ constitutional rights.

One owner called the plan “idiotic” and said it would cut the property values in the building in half. He claimed said the building now generates $20 million a year in property tax revenue.

Other owners said the city staff suggestion of a test closure of the road for a month this summer would be an especially bad idea because that’s a peak time for move-ins for students at Northwestern’s Kellogg School of Management, who typically occupy about half the units in the building, according to one resident.

Two moving vans parked outside the 800 Elgin building last August in an image from Google Maps.

Some condo owners in the building did concede that the existing configuration of the street poses hazards for pedestrians and suggested it could be redesigned to be safer.

Closing Elgin Road, which was created over a half century ago as the result of a land swap that let Northwestern University close Orrington Avenue to build the Rebecca Crown Center, was floated as a possible way to improve pedestrian safety and walkability by Alderman Judy Fiske, 1st Ward, after city officials received a conceptual plan for the idea earlier this year from a former Evanston resident.

Fiske said cars go too fast on Elgin and several pedestrians, including her, have been hit by cars while crossing the street.

Fiske said aldermen would need more information before making a decision about actually closing the street and said that “if it’s not going to be a win-win for everyone,” then she wouldn’t want to go forward with the test of closing the street this summer.

Alderman Melissa Wynne, 3rd Ward, offered an apology to the residents who, she said, “shouldn’t have heard about the idea this way” as a discussion item at the Planning and Development Committee meeting.

Instead, Wynne suggested, a community meeting with the neighbors on Elgin Road should have been held first.

Wynne also suggest that the city should be able to do computer modeling of the impact on traffic of a road closure without actually closing the road.

Alderman Ann Rainey, 8th Ward, said she opposed closing the road and that the city should do a survey about safety issues on it.

Alderman Eleanor Revelle said a diagonal road like Elgin offers a lot of benefits, but said she appreciated Fiske for raising the need to make it safer.

City Manager Wally Bobkiewicz said the staff could schedule a community meeting to discuss the safety issues later this summer.