Evanston aldermen Thursday voiced satisfaction with a draft master plan that would down-zone Central Street and unanimously voted to send it to the Plan Commission for detailed review.

Evanston aldermen Thursday voiced satisfaction with a draft master plan that would down-zone Central Street and unanimously voted to send it to the Plan Commission for detailed review.

The intersection of Central StreetÂ and Green Bay Road facing the Metra station, as shownÂ in this rendering,Â would be one of the few locations where a five story height might still be allowed under the plan.

About 120 people crowded the Civic Center's Parasol Room forÂ a workshop presenting the plan that wasÂ developed by city consultants in a process that included several meetings with neighborhood residents.

The plan also calls for narrowing the width of the roadway on the western portion of Central to match the width of the eastern section. That's meant to permit wider sidewalks and slow traffic.

The plan rejects earlier suggestions to create a bike route along Central Street, concluding that traffic is too heavy, the roadway is too narrow and that parallel residental streets like Harrison and Lincoln provide an alternate route.

As usual with plans in Evanston, any construction of new buildings in the area would be dependent on the initiative of private developers. But City Planning Director Dennis Marino said that proposed streetscape work could be paid for over several years through the city's property-tax-funded capital improvement program. 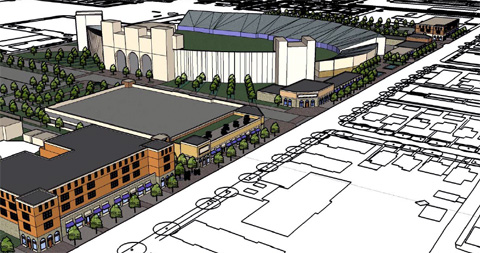 The non-descript open parking lot west ofÂ Northwestern University's Ryan FieldÂ might sprout a 30-foot high parking deck with retail space facing CentralÂ that could include aÂ new home for Mustard's Last Stand as shown in this conceptual drawing from the plan.

There was no indication at Thursday's planning session whether any property owners alongÂ Central Street are receptive to the changes the plan proposes or whether developers would find projects economically feasible under the proposed restrictions.

All the citizens who spoke identified themselves as living on side streets that would not have their zoning changed. While most praised the plan, some called for even tighter restrictions on redevelopment. 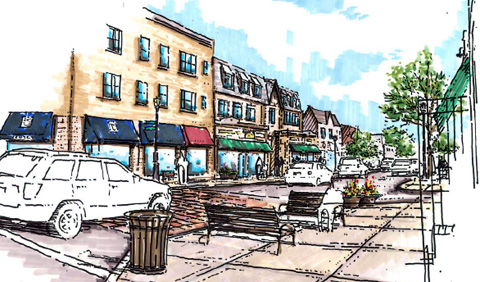 A rendering looking west on Central Street from Prairie Avenue showing traditionally styled three-story buildings that might replace existing single-story retail structures, including the one now housing the North Branch of the Evanston Public Library, and also illustrates some proposed streetscape improvements.

Several documents from the draft plan are available as downloads using the links below.