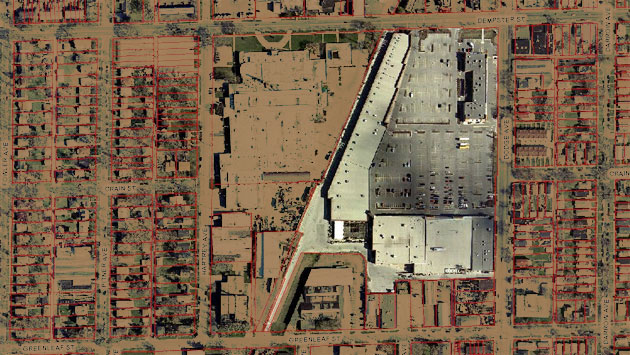 But final approval of the plan will have to wait another two weeks, after the objectors to the project — Aldermen Don Wilson, 4th Ward, and Coleen Burrus, 9th Ward — rebuffed a move to give the TIF ordinances immediate effect.

Supporters of the project estimated the delay would mean the TIF would fail to capture about $3 million in incremental revenue because of anticipated changes in the valuation of the property. The deadline for using last year's valuation in creating a new TIF is the end of this month.

The delay means less money for the TIF, but more for other taxing bodies that won't be deprived of that incremental property tax revenue for the 23-year life of the TIF.

Burrus said she was opposed to using taxpayer funds to lower the rent for potential new tenants at the shopping center and added that she couldn't imagine how spending $1 million a year in tax revenue on the center over the next 23 years could be justified.

An aerial view of the neighborhood with the shopping center TIF area highlighted.

But Alderman Ann Rainey, 8th Ward, said some existing structures at the center may need to be demolished. That's very expensive, and a very typical expenditure in TIFs, Rainey said.

Scott Inbinder of Bonnie Management, the new owner of the plaza, said the outlot building close to the intersection "is way too big."

"It blocks the visibility of other buildings in the center from the street," Inbinder said, contributing to vacancies on the west side of the center.

But he said that would require uncovering contaminated soil now sealed beneath the parking lot, which would create additional environmental remediation costs.

Inbinder declined to provide any specifics regarding new tenants his firm is talking to about locating at the plaza.

But he said he's looking "for any tenant that would complement the neighborhood and be a good co-tenant to the ones that are there now."

Alderman Jane Grover, 7th Ward, was absent from the meeting.