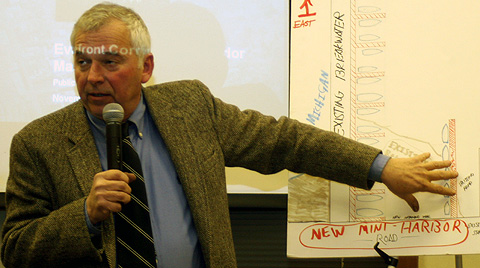 No sale: Charles Sheridan of 2332 Church St. urged adding a marina and restaurant near the current Church Street boat ramp.

The 8-0 vote at a special meeting of the Planning and Development Committee almost assures formal adoption of the plan by the nine-member City Council when it meets next Monday.

The plan postpones decisions about one controversial aspect of lakefront development — how to improve pedestrian safety — until after traffic studies of Sheridan Road are completed later this year.

But it calls for rebuilding pedestrian and bicycle paths along the lakefront, replacing existing bathroom facilities with new handicap-accessible ones that would also serve as control points for beach access, and creating a more varied landscape replacing some turf-grass areas with "magic hedge" and upland prairie landscapes.

The plan rejects increased commercial development along the lakefront, a stance that drew praise from most residents who spoke at the meeting — a group dominated by persons living near the waterfront.

Power-boat owners, who had turned out for earlier lakefront planning meetings to oppose suggestions in earlier drafts of the plan to eliminate the existing Church Street boat ramp, were largely absent Tuesday.

But one speaker, Charles Sheridan of 2332 Church St., did suggest expanding the boat ramp to provide a small marina area and expanding the concession stand at the nearby beach house to create a full-scale restaurant.

He said both concepts could raise much-needed revenue for the city.

But aldermen voiced no support for such suggestions, and Parks Director Doug Gaynor said the city now receives only $7,000 a year from leasing all concession operations at its beaches.

"Citizens are afraid to go into the park because of the dangers of Sheridan Road," she said, "Hardly any drivers ever stop for pedestrians."

Alderman Edmund Moran, 6th Ward, suggested the solution might be to build a pedestrian tunnel under the road, but Alderman Anjana Hansen, 9th Ward, said she "hates underpasses from a security point of view, not to mention the cost."

Lakefront Plan documents are available on the city website.