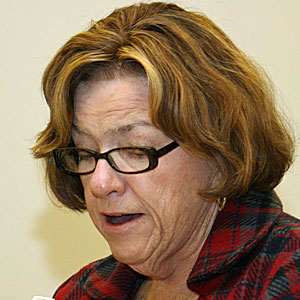 Evanston aldermen this evening voted to keep calling themselves "aldermen."

The City Council's Rules Committee voted to reject a proposal from Alderman Jane Grover, 7th Ward, to change their title to "council member."

After a debate in which it initially appeared that a few other aldermen might favor the change, in the end only Grover voted for it.

She had argued that the change, at a time when the rest of the city code is being revised to be gender neutral, would be a step in the right direction.

But Alderman Ann Rainey, 8th Ward, the longest-serving member of the council, said, "I'm completely opposed to the change."

She suggested that "council member" would not make it clear that they were members of a legislative body.

"Council member of what?" she asked, "the Council on Foreign Relations?"

In response to a question from Alderman Judy Fiske, 1st Ward, City Attorney Grant Farrar said he hadn't had time to study the issue and said he believed that "alderman" is a term of art under the state's municipal code for a lawmaker in a municipality with the council-manager form of government and lawmakers elected by districts.

Fiske said she didn't see a need for the change, noting that with six of Evanston's nine aldermen being women, the name doesn't "seem to be preventing young women from striving to be one."

"I'm proud to be an alderman. I don't see it as gender distinctive," Fiske added.

She also note that the League of Women Voters hasn't seen fit to change its name, despite having for years accepted male members.

City Manager Wally Bobkiewicz said the physical cost of making a change — in terms of printing and signage — probably would be only a few thousand dollars. He said he was more concerned about the potential expense of the legal work needed to make sure a change would fit within state law and to draft appropriate changes to the city code.

Alderman Coleen Burrus, 9th Ward, said if there was going to be a change she'd prefer "alderperson" to "council member."

But Rainey suggested that event "per-son" could be taken as not being gender neutral."

"I wore an ERA bracelet for a long time, and a "59-cent" button [referring to the pay traditional disparity between men and women's jobs] and I got into a lot of arguments about that," Wynne said.

She said she agreed with others that "council member" would be too generic, and she joined the vote against making a change.