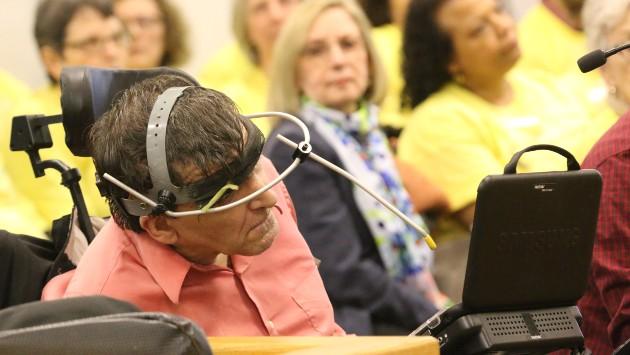 Evanston aldermen this week discouraged city staff from placing resolutions suggested by residents on the City Council’s agenda when they deal with subjects over which the city has no control.

Their comments came at the City Council Rules Committee meeting Monday and were prompted by last month’s debate over a resolution that would have urged state lawmakers to adopt legislation to permit medical aid in dying.

The Council ultimately decided not to take action on the death with dignity measure after it drew an array of supporters wearing yellow t-shirts and opponents, mostly in wheelchairs, to speak on the issue.

“I appreciate the work the citizens have put in on these issues,” Alderman Judy Fiske, 1st Ward, said, “But we haven’t put in any staff time or research on the issues and have no basis for a full and complete discussion of these matters.”

Alderman Don Wilson, 4th Ward, said he agreed with Fiske, although he suggested there should be an exception if another government body or policymaking organization sought the city’s input on an issue.

Alderman Eleanor Revelle, 7th Ward, said there should be exceptions so that the Council could adopt a resolution regarding state or federal legislation that would affect the city’s ability to act on policy matters or would affect its resources.

As examples, she mentioned state legislation that would preempt the power of local governments to regulate pesticide use or that would interfere with the city’s ability to determine land use.

She also suggested an exception for resolultions that would carry out commitments the city had made as a member of associations representing local governments. As an example, she suggested that the city should adopt resolutions favoring a treaty to ban nuclear weapons because the city is a member of a group called Mayors for Peace.

Alderman Cicely Fleming, 9th Ward, suggested that information about the issues Revelle raised would likely come from the mayor or the city manager’s office.

But the other resolutions, Fleming said, “take up a lot of time and are only symbolic.”

Fiske added that a staff report should be presented on any resolution that is placed on the agenda that should present both sides “so we’re not just getting one side from a group that’s promoting something.”

“I think we’re totally unprepared for this,” Fiske said. “Folks show up, everyone is very positive, and suddenly there are opponents who show up and it’s something we’ve not necessarily spent any time looking into.”

No vote was taken, since the matter was only on the agenda as a discussion item, but Acting Assistant City Manager Kimberly Richardson said believed she had sufficient direction from the aldermen on how to deal with the issue in the future.

Death with dignity issue to return to committee (1/30/20)