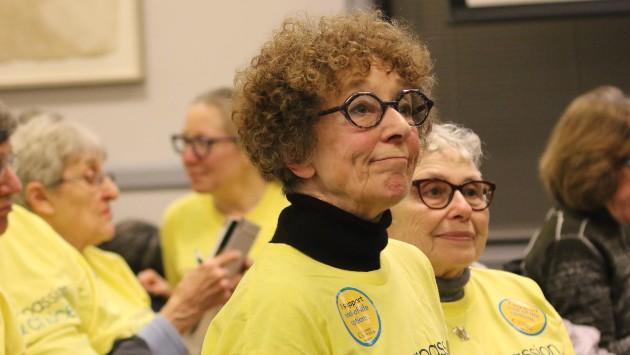 Evanston aldermen avoided voting on the substance of a death with dignity resolution Monday night by deciding the measure had been improperly advanced to the full City Council by its Human Services Committee.

The procedural maneuver came after Fay Clayton, a leader of the Compassion and Choices group in Evanston, asked that the measure be withdrawn from the agenda, saying several aldermen had asked for more time to discuss the issue.

The medical aid in dying resolution occupied most of an hour-long public comment session at which many, but not all, of the opponents were persons with disabilities who are not Evanston residents and appeared to have been recruited to speak by two out-of-town disability rights groups, Access Living of Chicago and the Progress Center for Independent Living of Forest Park.

Supporters of the measure, many of whom wore yellow t-shirts, were more likely to identify themselves as Evanston residents.

In moving to put off a vote on the issue, Alderman Don Wilson, 4th Ward, argued that the Human Services Committee erred in forwarding the measure to the council for discussion, but without a recommendation.

At the committee meeting, of the four aldermen present, only Alderman Eleanor Revelle, 7th Ward, indicated she favored the measure.

Alderman Judy Fiske, 1st Ward, said she didn’t believe the Council should spend time debating issues that were under the jurisdiction of the state or federal government, and Aldermen Peter Braithwaite, 2nd Ward, and Cicely Fleming, 9th Ward, indicated they had personal reservations about the proposal.

But they still voted to advance the measure to the full City Council without a recommendation.

A similar resolution failed to get out of the Human Services Committee in 2018.

Death with dignity issue to return to committee (1/30/20)