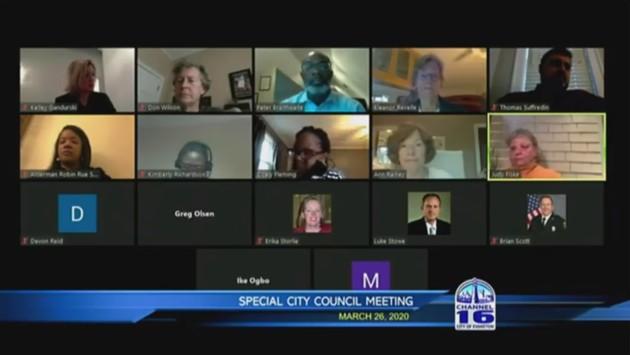 Evanston aldermen tonight were told that local hospitals — at least so far — have had the capacity to deal with the number of COVID-19 cases they’ve needed to handle.

The aldermen also received an update on the city’s efforts to continue operations during the pandemic. And they voted to extend the state of emergency declared last week by the mayor until April 13, the date of the City Council’s next scheduled meeting.

With all residents under orders to practice social distancing in response to the crisis, tonight’s special council meeting was held in a virtual format using the Zoom conferencing system.

He said the city is working to find better shelter for the homeless and to help congregate living facilities deal with any disease outbreaks that may occur there.

He said the most important thing for residents now is to heed the governor’s stay at home order to minimize the spread of the disease.

But, she said it became clear that that space was too small to provide for proper social distancing for persons working there, so the operations were moved to the new Robert Crown Center at the start of this week.

She added that starting next week the city will test having all participants in the emergency management effort work remotely. “That may be the new reality we’ll have to face,” she said.

Members of the Emergency Operations Center team reviewed with aldermen a 39-page presentation outlining the city’s strategy for responding to the crisis, coordinating with other governmental agencies and private sector organizations to deal with the crisis.