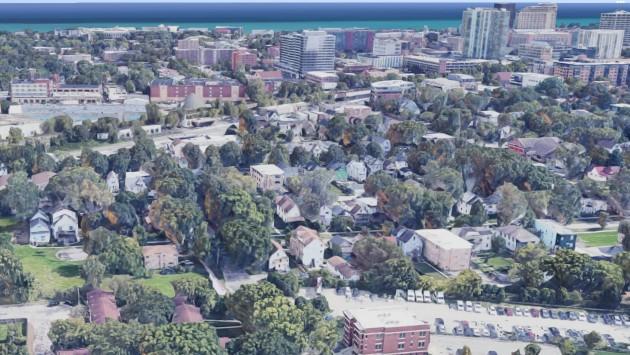 The Evanston City Council’s Planning and Development Committee is scheduled to vote Monday on a plan to reduce the basic building height limit from five to three-and-a-half stories in a four block triangle northwest of downtown.

The area now has a mix of single family homes, two-flats and small apartment buildings.

Some single-family home owners in the area want the zoning change and object efforts by a long-term owner of rental properties in the area to sell seven adjoining lots on the northeast corner of Emerson Street and Jackson Avenue for redevelopment with five-story apartment buildings.

Other developers have also recently indicated an interest in building apartments in the area, most of which is within a half mile radius of the Foster Street CTA station.

On this map, prepared by city staff, the area proposed for downzoning has the thick red border.

The area has seen renovation of some properties in recent years, especially in the 1900 block of Wesley Avenue, but little in the way of new construction for several decades.

Alderman Robin Rue Simmons, whose 5th Ward includes the neighborhood, proposed the downzoning in response to resident concerns, but the Plan Commission voted 4-1 last month to leave the zoning unchanged.