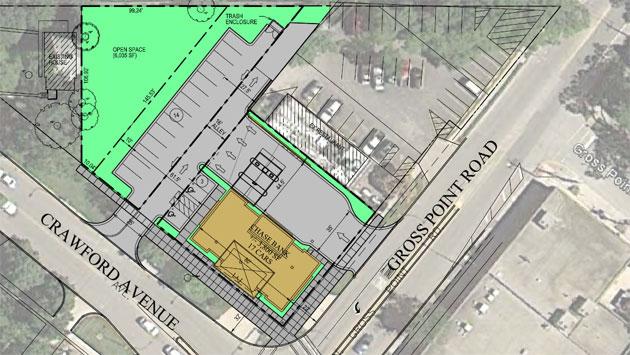 Evanston aldermen tonight will be asked to approve a compromise plan that would let a Chase Bank branch open on the northwest corner of Crawford Avenue and Gross Point Road.

The latest proposal, greatly scaled down from an initial plan that would have occupied three lots, calls for limiting the bank branch and drive-thru to the corner lot now occupied by a vacant gas station.

A second, now-vacant lot would be given by the developer to the city. The eastern portion of the lot would be used as a municipal parking lot that would be leased to the bank for daytime use. The western portion would  be maintained as green space.

Including a third lot beyond the vacant one in the project had been dropped in an earlier revision of the plan.

The proposal before aldermen tonigh would change the zoning of the corner lot to permit a drive-thru as a special use.

Other items on the City Council agenda tonight include a request from Northwestern University to overrule a Preservation Commission vote against its planned new visitor center and a plan to share use of Skokie's fire training tower.