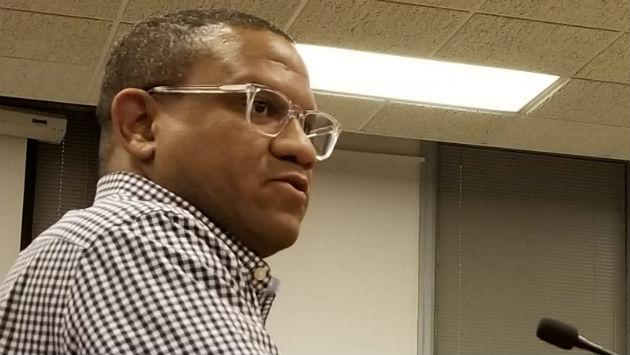 The trainer, Alvin Tillery Jr., is an associate professor of political science and director of the school’s Center for the Study of Diversity and Democracy.

He holds a Ph.D. from Harvard University and won an award from the National Conference of Black Political Scientists for his 2011 book, “Between Homeland and Motherland: Africa, US Foreign Policy and Black Leadership in America.”

In June he was interviewed by WTTW on the subject of what reparations for black Americans might look like.

Before the aldermen went into the closed-door meeting, Alderman Cicely Fleming, 9th Ward, announced that Tillery, an Evanston resident, was providing the training on a pro bono basis.

When Alderman Ann Rainey, 8th Ward, asked why the training was being done in executive session, Mayor Steve Hagerty said that the meeting was considered a self-evaluation program that is permitted to be held in executive session under state law as long as a representative of a statewide body of which the city is a member was present.

He said Brad Cole, the executive director of the Illinois Municipal League, would provide that observer’s role.

During their public meeting Monday, aldermen approved, on a 5-2 vote, the only item on the public agenda — the request for a property tax abatement for a planned event space at 611-621 Howard St. Fleming and Alderman Judy Fiske, 1st Ward, cast the no votes.