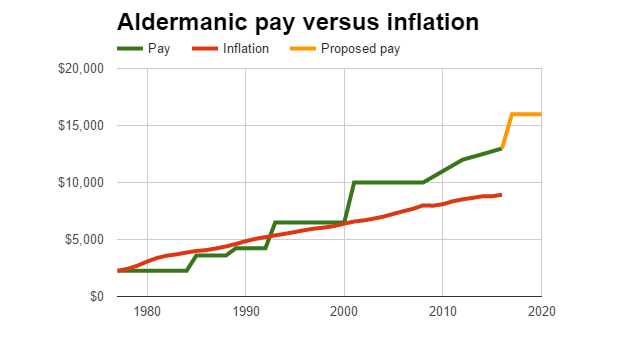 Evanston aldermen voted Monday to give the new City Council to be elected next April a 23.1 percent pay hike and also voted to boost the pay of the city clerk by $10,000 a year.

A four-member Compensation Committee appointed by the mayor had recommended the big percentage increase for aldermen, but had called for limiting the city clerk's pay hike to the annual increase given non-union city employees over the next four years.

City Clerk Rodney Greene complained about the modest size of the increase the committee recommended for him, but focused most of his attention in a presentation to the council Monday on an argument that elected officials aren't employees and that the committee had erred in comparing him to one.

The aldermanic pay hike was approved on a 6-3 vote with aldermen Fiske, Miller and Wynne voting no after suggesting the increase was too large.

The part-time aldermen now get $12,990 a year in cash pay and also are eligible for health insurance benefits.

The council had previously approved a 23.1 percent pay hike for the city's next mayor.

Under state law each City Council is required to set the compensation for the city officials to be chosen by voters at the next election.