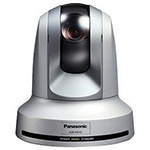 Tonight the Rules Committee is to receive a staff proposal to expand that not-yet-installed system to also serve one of the committee meeting rooms in the Civic Center.

Depending on the options the aldermen choose for the expansion, a staff memo says it could raise the total cost of the project to as much as $97,000.

The new camera systems would provide high-definition video capability, but because of limitations in the public access cable system, live broadcasts of council meetings would still be in standard definition, although the better quality would be available on videos uploaded to the internet.

Update: 7:20 p.m.: The aldermen opted to go for the $97,000 version. A final vote on the revised plan is scheduled for next Monday's City Council meeting.

Top: A Panasonic AW-HE50SN camera to be used in the new video system.