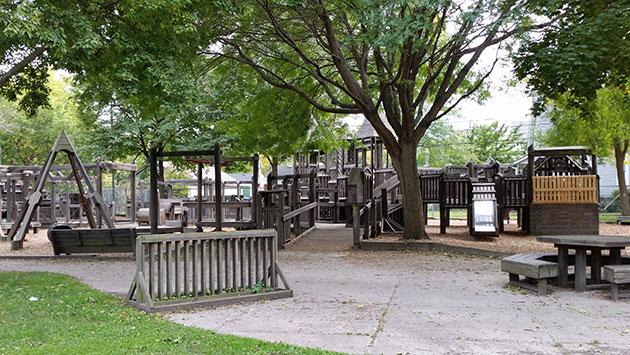 Evanston aldermen Monday approved a contract to complete the redesign of Penny Park despite claims from one resident that the project isn't necessary.

Lauren Barski, who lives across from the park on Florence Avenue said the 23-year-old playground equipment at park doesn't need to meet current accessibility standards and disputed city staff claims that the wooden play structures are failing where wood supports are buried in the ground.

But several other residents spoke in favor of the project.

Patrick Hughes, who owns Inclusion Solutions, an Evanston business that sells devices for businesses to aid disabled customers, said making the park accessible for everyone is important, and said even some schools in Evanston have only recently been made accessible.

Kelly Elwood brought her children to the meeting. She said Penny is her kids' favorite park but said the current structures make it easy for kids to disappear from view — causing anxiety for their parents. Her daughter, Elizabeth, though, said what she likes best at the park is "to play hide and seek with mommy."

Alderman Peter Braithwaite, whose 2nd Ward includes Penny Park, said he was involved as a college student in the original community-build effort for the park and last weekend drove to Valparaiso, Ind., to watch another park building project conducted by Leathers and Associates, the firm that organized the original Penny Park project here and that the city has selected to do the rebuild.

Braithwaite said his visit to Valparaiso made him undersand the importance of accessible design in the new park and that many aspects of the current playground are not accessible.

Public Works Director Suzette Robinson said the park planning process has been going on since last year and that additional community meetings would be held to develop the conceptual design for the park that exists now.

She added that what has been designed so far would cost roughly $300,000 to build and the budget for the project is $450,000 so one goal of the additional meetings will be to determine what additional amenities can be added to the project.