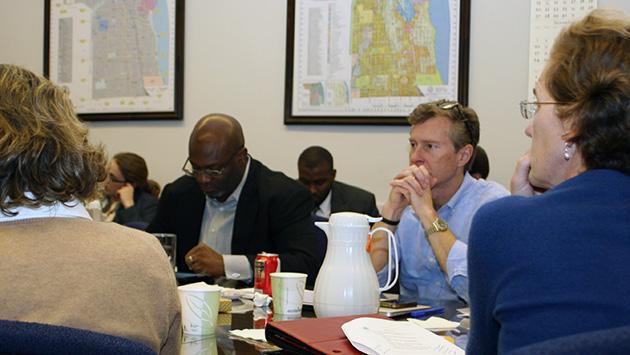 Evanston taxpayers could eventually save as much as $4 million a year if the city shifted to making more of its purchases with current revenue rather than bond debt.

Assistant City Manager Marty Lyons, who proposed the shift at a strategic planning meeting with aldermen Tuesday night, conceded that the savings would be tiny to begin with — but said they gradually would rise to that $4 million a year figure by two decades from now.

Lyons said the city should split its capital spending between "pay-as-you-go" and debt-funded projects.

He said one candidate for the pay-as-you-go approach would be water and sewer mains. Individually they have a very long life, but some need to be replaced every year.

And more facilities mantenance and ongoing upkeep projects could also be put on a pay-as-you-go basis, he suggested.

Only major one-time facility renovation or replacement projects — with an expected lifespan far longer than the 20-year bonds used to pay for them — would still be funded with long-term debt under this plan.

The change, he suggested, would eventually allow the city cut its bond debt payments in half — from the current level of about $20 million a year to less than $10 million — while spending less than another $10 million on pay-as-you-go projects.

If the change isn't made, he said, funding all projects through bond debt would add an extra $4 million in interest payments to annual city tax bills by 2034.

"Thank you, Marty," Burrus said. "I think pay-as-you-go is the responsible way to handle our debt going forward. It will help us get out of the serious crisis we're in now."

When the meeting facilitator, consultant Jean Bonander, asked whether the group favored the "pay-as-you-go" approach she got head nods around the table, and the same response when she asked wether they favored reducing the city's reliance on debt financing.

City Manager Wally Bobkiewicz said the city could start building a pool of money for pay-as-you-go projects by investing one-time revenue toward that goal.

He said building permit fees and real estate transfer tax revenue has been higher than expected this year and could provide some start-up funding for the shift.

But he said the change would also likely require either trimming the amount the city spends on general operations to create the pool of capital project cash — or raising additional revenue from taxes and fees.

Bobkiewicz said he'd return to the council in December or January with some more specific proposals, and, assuming aldermen approve those, would include those concepts as part of the community engagement process for preparing the city's 2015 budget.