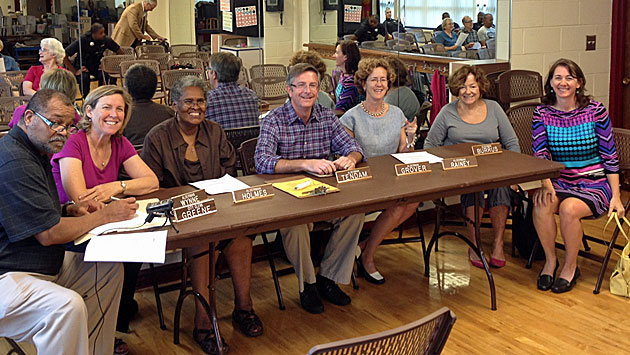 It took Evanston aldermen just a few minutes at a special meeting Thursday night to place an advisory referendum on the November ballot asking voters whether they favor a constitutional amendment to limit corporate spending on election campaigns.

The referendum is a response to the 2010 U.S. Supreme Court decision in the Citizens United case, in which the court threw out campaign spending limitson the theory that the First Amendment guarantees speech rights to corporations as well as individuals and that spending money on advocacy for an issue is a protected form of speech.

That was about twice as long as Alderman Ann Rainey, 8th Ward, had predicted, in responding to complaints from some residents about aldermen "wasting time" on the national issue.

The meeting was held in the unusual venue of the Fleetwood-Jourdain Community Center because that's where Alderman Delores Holmes, 5th Ward, had already scheduled her ward meeting for later in the evening.

The aldermen faced a deadline of next Monday for getting the referendum question on the ballot, but nobody raised the issue of holding the referendum until too late to put it on the agenda for last Monday's meeting, the last regularly-scheduled session before the council's traditional August recess.

Two residents raised questions about why the issue was being considered for the ballot, Bobkiewicz says, but no one advocated for or against the measure itself during the meeting.

The vote, among the six aldermen present for the meeting was unanimous in favor of holding the referendum. Mayor Elizabeth Tisdahl and aldermen Judy Fiske, 1st Ward; Peter Braithwaite, 2nd Ward, and Don Wilson, 4th Ward, were absent from he meeting.

The aldermen last spring unanimously endorsed such a constitutional amendment which has also won the backing of U.S. Sen. Dick Durbin of Illinois and other prominent Democrats.

Referendums on the issue will also be on the ballot this fall in places ranging from Northfield Township to the state of Montana.

The referendum question will ask:

"Shall the U.S. Congress pass a bill, to be duly ratified by three-fourths (¾) of the states, adopting an amendment to the U.S. Constitution, empowering the federal government and the states to regulate and limit political contributions from corporations?"