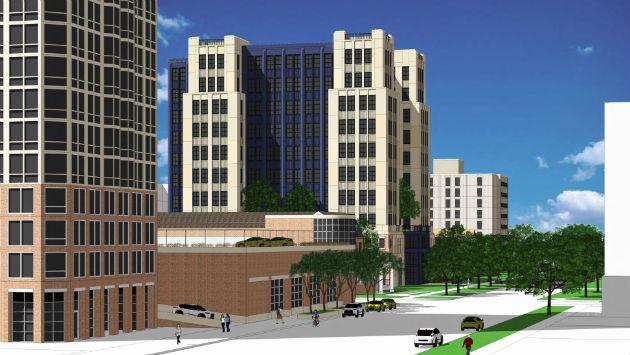 Evanston aldermen Monday approved the sale of a city-owned parking lot on Chicago Avenue for redevelopment as an 11-story office building.

Alderman Judy Fiske, 1st Ward, said the office development would provide “an extraordinary public benefit” for the city — a Class A ofifce building — something she said “the city desperately needs.”

Fiske said Evanston has lost a lot of businesses to other communities that had such space to offer.

And she said downtown retailers and restaurateurs need the customers that the estimated 500 workers in the new building will become.

Wynne said the proposed building was beautiful — but on the wrong site. Revelle complained that it would overwhelm the Frances Willard historic site next door.

But Alderman Ann Rainey, 8th Ward, said there wouldn’t be any harm to the adjacent properties. “These developers are very responsible,” she said, “and the development will be very good for small businesses.

The city’s 2009 Downtown Plan, which was never implemented, called for converting the parking lot to a city park. And Aldermen Don Wilson, 4th Ward, and Cicely Fleming, 9th Ward, suggested that the $4 million proceeds of the sale should be set aside to make improvements to other city parks.

Once the sale is completed, the project will still need to go through the city’s planned development process, which could add another six months of talk before construction could begin.