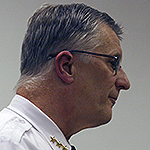 Evanston police responded to more than 36,000 calls for service last year — and less than one call in a thousand led to a formal complaint being filed by citizens against officers.

That was one data point from the department's Office of Professional Standards that led to praise from aldermen on the Human Services Committee who reviewed the report Monday night.

Alderman Delores Holmes, 5th Ward, said she was impressed with how OPS had handled the complaints filed and complemented Police Chief Richard Eddington on the report.

Eddington said the report demonstrates that most of the time officers handle their interactions with the public in an appropriate manner.

And he noted that the complaint ratio would look even better if the thousands of traffic stops made by officers were included in the total number of calls.

However, the 30 complaints in 2012 was the second highest number in the past five years, exceeded only by the 31 complaints filed in 2009. The average for the five year period was 25.  The lowest number of complaints, 20, was recorded in 2008.

Of the 30 citizen complaints that went through the formal complaint register process, two of false arrest, and one each of unprofessional conduct and improper service were sustained.

In nine cases the review process exonerated the officer and in seven the complaint was not sustained.

The report said two complaints couldn't be resolved because the complaintant failed to cooperate with the review process and eight were still pending at the end of the year.

Thompson was retained by the city following complaints of racial profiling made by a Northwestern University journalism professor who's son was briefly detained by police as a burglary suspect.

Holmes said she "had the pleasure of attending" parts of two sessions Thompson held for officers.

"He's very engaging and super-knowledgeable, and it was interesting to see how he engaged the participants," Holmes said.

And Alderman Jane Grover, 7th Ward, said she'd met Thompson at an evening community conversation about race at the Robert Crown Center where, she said, "we had a great conversation."

Alderman Mark Tendam, 6th Ward, said he sat at Thompson's table at the Robert Crown event and agreed that Thompson "is a valuable resource for the city on many different levels."

The aldermen said they hoped the chief would be able to bring Thompson back for additional training sessions.

Eddington said he hoped to do that and that he had been impressed with Thompson's perceptiveness about a wide variety of issues that impact minority and low-income neighborhoods.