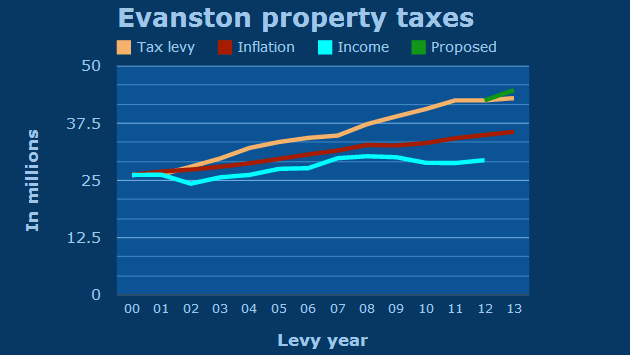 As shown in the chart above, Evanston's property tax rate has been rising at roughly twice the rate of inflation for over a decade, and has exceeded gains in the median household income of Illinois residents by an even greater amount.

The budget originally proposed for next year would have continued that trend. (See the green line on the chart.) But with the revisions reviewed Monday night the levy increase will be cut to roughly half the inflation rate

That will mark the second year in a row of property tax hikes below the rate of inflation. Last fall, ahead of  this spring's election, aldermen adopted a budget that held the property tax levy unchanged for first time in more than a decade.

The revised tax levy proposal will raise $42.99 million, compared to $44.74 million under the original proposal.

Alderman Ann Rainey, 8th Ward, said, "I've never felt this confident about a city budget in many years," adding that she appreciated the work city staff had done in the last few weeks to make the revisions.

Alderman Coleen Burrus, 9th Ward, said, "The budget team did a remarkable job. I couldn't have asked for much more."

The biggest challenge the budget staff faced was overcoming a big jump in bond debt payments due next year because of a set of bonds issued in 2006-07 that started with interest-only payments but had big principal payments kicking in next year.

Unchanged, they would have raised the debt service tax levy by nearly $3 million next year.

The biggest spending increase in the budget is for the library — which — despite some last-minute trims by the library board — will see its budget increase 18.3 percent, or 35.9 percent if debt service payments shifted from the city's accounts are added in.

Several representatives of mental health service providers that receive funding from the city criticized the budget Monday night for including only a 5 percent increase for their programs — half what the Mental Health Board had recommended.

City Manager Wally Bobkiewicz said he hoped the City Council could address the mental health funding issue early next year and provide more guidance to the Mental Health Board before it has to make its funding recommendations for 2015.

Revised figures for total budgeted city spending for next year were not available at Monday night's meeting. They'll be presented next Monday night when the council is scheduled to adopt next year's budget.

Note to readers: You may notice that the reduction in the rate of tax levy increase reported in this morning's story is greater than the one reported in Monday's precede story.

Here's why. The 15-page packet distributed ahead of the council meeting detailing the budget revisions didn't include a spreadsheet showing their impact on the tax levy. In creating a spreadsheet of my own on Sunday, I missed the impact of some of the changes. I ran my numbers past City Manager Wally Bobkiewicz, who responded in an email message that "I think you have it correct." So, I went with those numbers for Monday morning's story.

The numbers in the story above reflect the spreadsheet summary of the budget changes that Assistant City Manager Marty Lyons presented at Monday night's meeting.