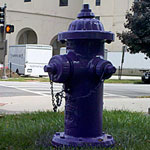 Alderman Jane Grover, 7th Ward, raised the idea as an amendment to a contract that would launch a five-year repainting program for all the city's hydrants.

Grover said she'd like the purple hydrant concept — launched in 2010 as part of a promotion for Northwestern University's football program — expanded across the city as hydrants are repainted.

And she suggested that, based on a preliminary discussion with NU's athletic department, that the school might be willing to pick up at least part of the cost of the project.

But Mayor Elizabeth Tisdahl asked why not have some hydrants orange and blue — the colors of Evanston Township High School? 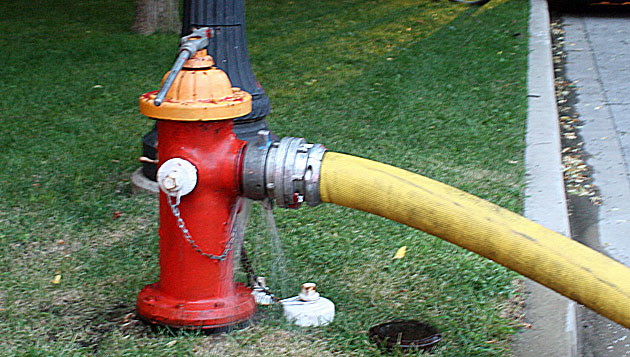 A hydrant with the old color scheme in use at a fire scene in Evanston.

And Alderman Mark Tendam, 6th Ward, said that while he believes the purple hydrants are OK around the university, it would be a mistake to use the color throughout the city.

"We have very traditional light posts and homes," Tendam said. "Red fire hydrants are a classic American icon," he added, suggesting that purple, because it's a dark color, might also make it harder for firefighters to find the hydrants at night.

"Lots of other groups in Evanston have a color associated with them," Fiske said, and might want their iconic colors on hydrants. She said she agreed with Tendam and wanted to stick with the traditional red.

Although there were some objections to the purple color based on a suggestion that in traditional hydrant color schemes, purple indicates that the water from the hydrant is not drinkable, Utilities Director Dave Stoneback said there's no real functional issue about the color.

Stoneback says that in the past hydrants were painted with a different color on the bonnet, or top of the hydrant, to indicate the size of the water main serving it.

But now, he said, a band of reflective tape in different colors is used to indicate the hydrant's water flow capacity.

The city hasn't had a regular program to paint hydrants since 2006, when seasonal employees were hired for the job.

Alderman Ann Rainey, 8th Ward, while expressing no opinion about the choice of a color, said she was unhappy that the contract was being awarded to a firm from outside of Evanston.

Despite that, the contract was approved unanimously, with red as the chosen color.