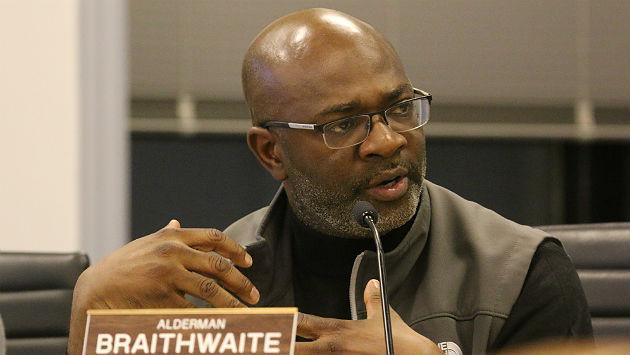 Voicing concerns that loud and angry comments by some residents are discouraging others from turning out for public meetings, Evanston aldermen Monday adopted a resolution to bar disruptive speakers from further participation in a meeting.

Alderman Peter Braithwaite, 2nd Ward, suggested it might also have been prompted by comments made by Albert Gibbs at last week’s City Council meeting.

Gibbs started out voicing opposition to issuing bonds for the new Robert Crown Community Center project but shifted to an attack on Alderman Ann Rainey, 8th Ward, for remarks she’d made at a Ridgeville Park District meeting last month and went on to claim all the aldermen were “racist and prejudiced.”

While Mayor Steve Hagerty had announced a 90-second time limit for public comment speakers, Gibbs ended up speaking for more than three minutes before finally leaving the podium.

Braithwaite said Gibbs definitely was being loud, but he doubted he was actually being threatening, although he said there have been other residents who have been extremely threatening in their remarks in the past.

Any person who makes such remarks, or who utters loud, threatening, personal or abusive language, or engages in any other disorderly conduct which disrupts, disturbs or otherwise impedes the orderly conduct of a meeting shall, at the discretion of the mayor or presiding officer, be barred from further participation during that meeting.

Alderman Judy Fiske, 1st Ward, said many people who she knows to be very reasonable are now reluctant to come to speak at city meetings because of the way they’ve been treated by very vocal advocates both in the building and the parking lot.

The aldermen also agreed to hold a discussion of further steps they might take to try to discourage uncivil behavior at the June 3 Rules Committee meeting. Bobkiewicz offered as a starting point for that discussion decorum rules adopted in 2010 by the Boulder, Colorado, City Council.

The council there acted after a frequent council critic stripped to his boxer shorts and refused to leave the podium at a council meeting.