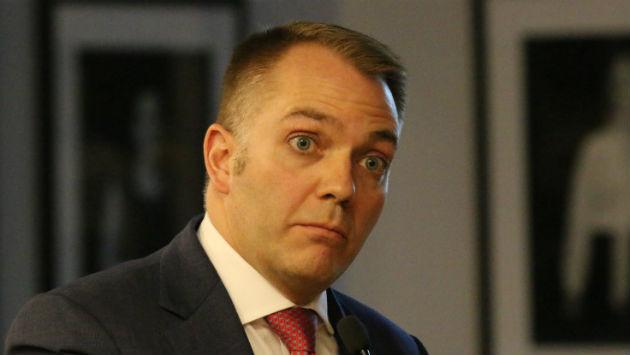 Evanston aldermen resoundingly rejected plans for a 33-story residential tower at 601 Davis St., Monday night refusing to even advance it from committee for a full City Council debate.

Despite a last-minute offer from Vermilion Development President Dave Cocagne to consider modifying the proposal, aldermen on the Planning and Development Committee declared that it was so out of scope from what they might approve that any new version of the project would have to start the planned development review process over from scratch. 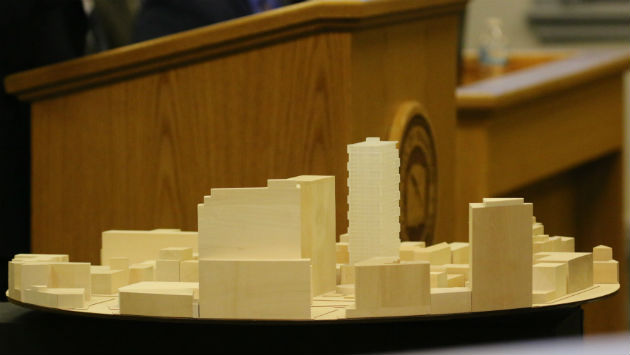 A model of the tower, at center, that aldermen rejected.

Only Alderman Ann Rainey, 8th Ward, suggested a milder response — tabling the plan for a few months to give Vemilion time to make substantial revisions to it.

The committee vote to reject the plans out of hand was 6-1. 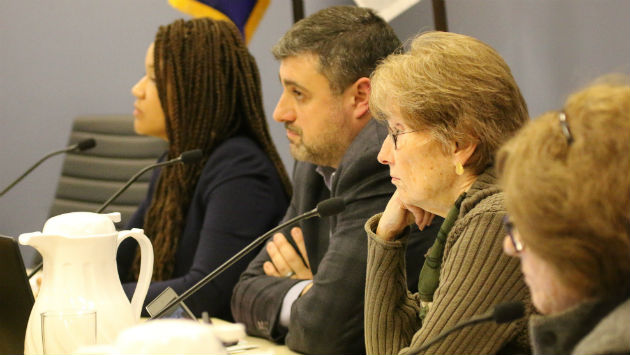 Aldermen at the committee meeting.

Developers of the Albion Residential project on Sherman Avenue, which aldermen approved 5-4 last fall, had made substantial revisions to their plans as they worked through the review process — reducing the building’s height and unit count and increasing the provided parking.

But Vermilion’s proposal asked for far more in the way of variances from the city’s zoning limits to start with, and as the plans accumulated negative recommendations from the city’s Design and Project Review Committee and the Plan Commission, Vermilion generally struck to its guns — except for a last-minute proposal to lease additional parking spaces at a city garage.

That solution had worked for other developers, when the city had substantial excess capacity in the garages. But with officials now worried that they could instead run out of garage space, it didn’t gain any traction.

Alderman Eleanor Revelle, 7th Ward, said the proposal had a lot of positive elements — that it would bring additional economic vitality to downtown and preserve the landmark University Building on the corner.

But she said the height and density go too far beyond what’s appropriate for the site.