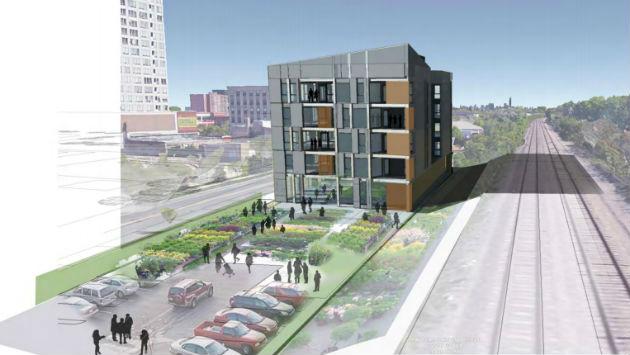 But after a last-minute change to the plans, they did approve a $1.9 million forgivable loan from the neighborhood’s tax increment financing district to make the rest of the development possible.

Some aldermen said they felt too rushed to make a decision on the affordable housing component of the new deal when they’ve yet to come up with an overall plan for handling what’s expected to be $2.4 million in payments into the fund from the developer of the recently approved 831 Emerson project.

Just two months ago they somewhat reluctantly approved spending $579,000 in federal and city funds requested by a non-profit group to buy and rehab two affordable rental units in town.

Developer David Brown, who had proposed including on-site affordable units rather than paying into the affordable housing fund, said he had welcomed the proposal from city staff to boost the number of affordable units by taking the $1 million subsidy.

“We’ve had a great collaborative process with staff for the past seven months,” Brown said.

But that raised the city’s total share of funding for the $7.8 million project to nearly 40 percent — which also drove some aldermen to oppose the deal.

If instead he keeps the unit count at 24, he would need to provide five affordable units.

Brown said the change of direction — which came after resistance to the project during the Administration and Public Works Committee meeting earlier in the evening — was so quick that he hadn’t had time to work out all the financial details, but he said he “would just comply with the affordable housing ordinance as it is written.”

The development is to be anchored by an organic garden center called City Grange operated by LaManda Joy, founder of the Chicago non-profit Peterson Garden Project, She says the garden center would be operated as a for-profit social enterprise.

Alderman Ann Rainey, whose 8th Ward includes the site, strongly supported the development, saying the site — which includes a city parking lot and an abandoned auto repair business — “is a horrible mess now.”

Several neighbors of the project also supported the plan, while a member of the city’s Housing and Homelessness Commission objected that it hadn’t been sent to that group for review.

Brown said he needed city approval for the deal this week because he faces an Aug. 1 deadline to close on the purchase of the auto repair shop site.

A companion proposal to authorized the city manager to negotiate the sale of the city parking lot to the developer was also approved.

The development will still need to go through the city’s Planned Development review process, which is likely to take several months.