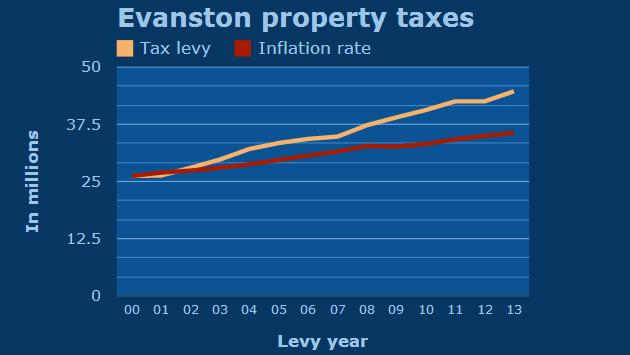 Evanston aldermen, who pointed to holding the line on property taxes earlier this year as they campaigned for re-election, are about to return to their old ways of raising those taxes at roughly twice the rate of inflation.

The City Council tonight is scheduled to vote on property tax levies for next year that total $44.7 million, up from $42.5 million this year.

That's a tax increase of 5.2 percent — compared to an increase so far this year in the consumer price index of just 2 percent.

With the new levy, Evanston property taxes will have risen 71 percent since 2000, while the overall cost of living has gone up 36 percent.

The City Council won't adopt its budget for the coming year until later this month, but so far there's been no sign of signficant dissent among the aldermen to the budget prepared by City Manager Wally Bobkiewicz, or to the tax hikes it will require.

The biggest single increase this year is being forced on taxpayers by the city's unelected library board, which is demanding a massive spending increase.

But taxation to service the city's debt will also increase significantly, while taxes to support the public safety pension funds will decrease slightly. Taxation for general fund purposes will rise less than 1 percent.

The tax levy will be discussed tonight at the Administration and Public Works Committee meeting, scheduled to begin at 6 p.m.

It is set for final approval at a City Council meeting later this month or early in December.

(The tax year marked on the chart is the year the tax was levied, or ordered, by the council. That tax is paid by taxpayers the following year. So the 2013 levy funds the city's 2014 budget. Data for the chart is taken from annual city budget documents available online and from the inflation calculator of the federal Bureau of Labor Statistics.)